As I hope most of you are aware, tax time is upon us. This year I’m in the unenviable bracket of “fucked.” I owe the government a lot of money. Turns out the government just kinda forgot that they were also gonna need an additional 4% of my income. Which is stupid. The extra money at the end of it all has got to be the worst part about the whole tax thing. I want to call up the government and ask them what the hell they did with all the other money they’ve been taking throughout the year. But if instead of my owed taxes I just send them a letter that says “you can have some more when you learn to live with what I already gave you” I would in all likelihood end up in jail. And jail is of course a tax funded institution, which they would need more money to fund. So someone else would just end up in the same situation I find myself in right now. Which doesn't seem fair. 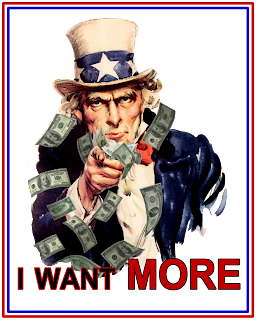 My least favorite part of the tax process has got to be the deductions the government gives out. Mostly because I don’t get any of them. If I had a couple kids, bought a new energy efficient car, or bought a house I can’t afford I’d be sitting pretty come tax time. They never seem to be doing what they should be either. There’s a tax credit for buying an energy efficient car. But there is not a tax credit for not owning a car. If they’re trying to encourage environmentally friendly behavior then here’s a case where doing nothing is the best option. Hey government, why not a tax credit for only burning tires on even numbered days? Only pouring ethanol based fuel into local waterways perhaps? Hybrid drivers don’t need anything to make them feel better about themselves anyhow. Most days I ride my bike to work. I show up disgusting and sweaty, I should at least get reimbursed for my cologne and Goldbond medicated powder. While I’m on the subject of the environment. Know what else you get a tax credit for? Kids. Shitty CO2 spewing children gets you a tax credit. I don’t know if you get extra tax money if it’s a small underpowered one like with cars, but nonetheless.

We live in a democracy so our taxes are supposed to go to what we want. But that’s not how it works at all. We live in a democracy in which a lot of people vote. So our wants are diluted by all the other assholes with the audacity to vote. You don’t get to vote to get what you want, you vote to get what you want in relation to every other voting idiot. You get to vote to get 0.000000763359% of what you want, and I don’t necessarily like those odds. It almost would be easier in a dictatorship. If you lived in communist Romania you were pretty well fucked, but at least Ceauşescu got 100% of what he wanted. And for the record you can buy a lot of nice shoes with a whole country’s worth of peasant blood. Plus as a bonus you get to kill that guy eventually.
Supreme court justice Oliver Wendell Holmes Jr. is famous for having said “Taxes are what we pay for civilized society.” Which is both horribly condescending and only half true. He was a supreme court justice. Of course he thought taxes were the best he had a cushy tax funded job. You better believe that I’d be singing a different tune if taxes were what was keeping me in bottles of brandy and fresh snuff. And to add insult to injury, the guy’s buried in Arlington National Cemetery. Which is a tax payer funded National Park. He’s been dead for almost eighty years and he’s still feeding at the public trough. What Justice Holmes doesn’t tell you is that everyone pays taxes, but not everyone gets to live in a civilized society. If he lived in current New York he would’ve said taxes plus a shitload of rent are the price you have to pay to live in a civilized society. I’ve got half that equation down right now. But unfortunately I can’t really afford the part where I have the rent money to live in a civilized society. I live in a shitty neighborhood that always seems about one day away from turning into The Purge. Yet I still have to fork over money so Justice Holmes can have a very civilized afterlife.

Listen, I'm not saying there shouldn't be taxes. I know the myriad ways that taxes benefit me. I'm just saying I paid too much of them this year, and I don't like it. Which is probably the most American feeling there is.