As I have mentioned a couple of times I work retail. There are a lot of bad things associated with retail. I’ve talked about how awful finding CDs and DVDs for idiots can be. I’ve also talked about a way to spot certain problem customers immediately. Today I’m gonna get talk about how one of the indignity of working retail, but with a twist. Sometimes a negative is actually a positive in disguise.

Problem number one is a matter of personal space. I’m kind of a weirdo when it comes to this. I don’t have a set limit about how close strangers are allowed to be to me, but I’m the kind of guy who hates when other people’s spittle ends up on my face. And you’d be surprised how many people either don’t notice or don’t care where their spittle ends up. I don’t know what the problem is either. The perception of a certain number of customers is that communication is a lot like feeding a baby bird. They have to actually dump their stupid words into my open mouth in order for me to hear them. This makes me highly uncomfortable. People also don’t like being called on this. A gentleman once decided about four inches was the appropriate distance to shout his questions at me. I did my best to intimate that four inches was far too close by stepping away from him. He proceeded to yell at me for making him feel unwelcome in the store. I can’t imagine he’s welcome anywhere if he feels appropriate conversation distance is close enough as to be able to identify exactly what kind of bagel he had for breakfast by smell. There are tricks to the trade to avoid this kind of behavior. If a customer starts creeping in a bit too much what I’ll do is stand with one foot in front of me about a foot. This is an imperfect solution partly because it’s really uncomfortable. Also it leads to a lot of people standing on my foot. Not a stepped on foot, because that would suggest that someone would step on my foot, realize how much of a space invading weirdo their being, apologize, and back off. It leads to people carry on several minute long conversations while STANDING ON MY GODDAMNED FOOT! This hurts. Even when it doesn’t hurt it just sucks. I’ve thought about wearing a sombrero to give people an idea of where they should and should not stand, but hats are strictly forbidden by the dress code.

Problem number two is a matter of me and my fellow employees. Retail work are the kinds of jobs that you can get without any prior experience or education. This is great if you’re looking for a job and you don’t have any experience or education. This can also be great if you’re a company looking for employees who don’t deserve to be paid a lot. The problem arises when you rely on this army of uneducated dullards to actually make your business grow. Most businesses want to sell things to people. And chances are you need some folks to facilitate those sales. But if you have a bunch of students, ex-cons, dropouts, and other n’er do wells as the public face of your business you may be in trouble. What the company I work for decided was that they couldn’t rely on us to choose the words we say to people so we are given a script in the form of a question and answer checklist. This way they can be ensured all of their employees are on the same page until they find a way to replace us all with animatronic bears. Even though it can be a little demeaning I definitely understand the logic behind it. This is the best way to ensure that they don’t put the fate of their company in the hands of people like me. I fully understand this and don’t begrudge them giving me a script to ensure I don’t say something stupid. They used to give us our scripts in a pretty patronizing manner. We were given folders with “top secret information” written all over them. I don’t know if that was viewed as a little bit too much or what, but they abandoned those in favor of clipboards. I think this clipboard thing is a bit silly, but again I understand they don’t want the likes of me just up and choosing what to say to people. That would be chaos.

It was shortly after the clipboard regime started that I noticed something really nice about them. There are two styles of clipboards available, standard and legal sized. I was always a fan of the standard because they’re smaller and easier to carry. One day I grabbed a legal sized clipboard and that’s when magic happened. I was holding my clipboard perpendicular to my body to make it easier for me to write when a particularly close talking individual leaned in to ask a question immediately in front of my face when something stopped him. He was so intent on yelling his question into my face that he didn’t even noticed I had a legal sized forcefield sticking out of my belly. We were both stunned. Him, because he just got poked in the stomach with his own stupidity. Me, because I hadn’t realized I had been holding the greatest instrument in retail clerk personal protection since bullet proof glass. 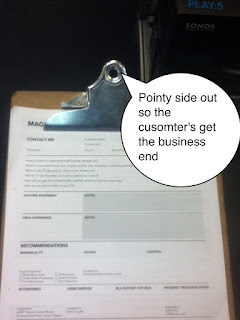 I still don’t like the idea of being the kind of person who has to read off a clipboard for a living. However my embarrassment at doing that is often offset by watching dumb people repeatedly run into my clipboard during an interaction. The record so far is 6 times with the same guy. It is nice to know that sometimes a cloud has a silver lining you didn't even notice. Until an idiot runs into it.
Posted by Adam Sokol at 11:05 AM