A couple years back I did something everyone should do. I bought a real bitchin' set of headphones, or "cans" as pretentious douchebags refer to them as.  I spent some money, not a crazy amount, but enough to make me notice the hit to my bank account. The ones I ended up getting were the Bowers and Wilkins P3s. Good solid headphones I would highly recommend.  They sound good, they weren't crazy expensive, and they don't look ridiculously ostentatious. All things I like in a headphone.

I was surprised by how they change my listening habits. I find I like hip/hop more now. Those artists tend to recognize that a lot of people will listen to their stuff using headphones and they're more apt to screw with sound staging almost to turn the headphones themselves into an instrument. For whatever Kanye lacks in basic human decency he makes up in making his albums interesting to take in. I don't always like them, but they are interesting to say the least. The Velvet Underground's Pale Blue Eyes sounds even better. I didn't think it was possible, but it does. It's like Lou Reed is whispering it into your ear. Better even, because this way you don't have to have notorious jerk Lou Reed in your home. Adele sounds great. Always has always will. Only problem there is the last thing I needed was to feel a more personal relationship with Adele and her music.


Something's don't sound nearly as good. I think punk rock is meant to be played on the shitty tape deck of my 86 Grand Am. They say punk sounds better on vinyl, but your parents' turntable probably sucked balls so what do they know. I guess if you're into overthrowing the government you've got bigger fish to fry than worrying about making sure the levels were right, because punk I guess was more about the message. The thing is I'm in my thirties now. The message sounds pretty goddamn silly. Would it have killed any of you assholes to say once "hey fellas how's about one more time from the top. Lets get this right and then maybe we'll be able to subvert the dominant paradigm and all that other horse shit."


As I was going through my favorites and rediscovering things I had missed for years there was one I was really looking forward to diving back into. That was of course Meat Loaf's Bat Out Of Hell. Meat Loaf for me is not a guilty pleasure. I don't listen to Meat Loaf through a veil of irony.  I don't constantly use air quotes while I'm listening to him. I just listen and enjoy the hell out of it. And Bat Out Of Hell is damn near a perfect album. From open to close all you get is classic Loaf, and what the hell else can you ask for? I've listened to this album an untold amount of times and was really looking forward to listening to again for the first time through fresh ears. I set aside an hour (that's just for Paradise) put it on and it was, in a word, fine. 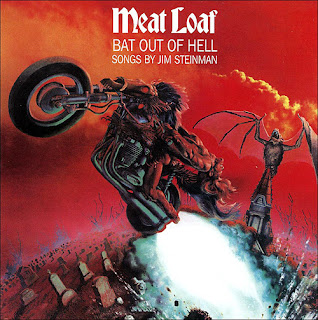 I don't know what I was expecting, but it didn't quite live up to it. Don't get me wrong it sounded good. It sounds pretty damn good. It sounded better than it had. The vocals were clearer and the bass was better, but other than that it was just fine. I guess I assumed it would open up all these different avenues that had previously been closed off to me with my shitty earbuds. I'm not a music snob by any stretch. I don't really have a CD player any more. Just about all my music is MP3. That being said I have had more than a few albums saved on my iTunes that required redownloading because they were too compressed. So I spent a while searching the Internet for a better file. A master sound CD, a FLAC file, super audio cd, or just a file with a more MBs listed. Anything. Turns out very few people on the Internet are audiophiles, into Meat Loaf, and use torrent sites.


Maybe it's for the best. Maybe humans weren't meant to take in all that Meat Loaf is putting out there. Maybe Bat Out Of Hell is compressed for society's safety. Too much of a good thing can kill you. Maybe 68 MBs of Meatloaf is all the average human can take before they overload and are sent scampering back into hell. I hope if that's the case that the masters are saved somewhere. Waiting for the world to change before it can be released to the waiting world. Like with Nelson Mandela.
﻿

I've since given up the search for now. I may not have uncompressed audiophile quality meatloaf, but I've got pretty damn good sounding meatloaf and I've got a bitchin' set of headphones. And as a wise man once said "two out of three ain't bad."