This month my wife and I finally moved out of Washington Heights. It had been our home for three years, and it actually felt like home for part of that. Part of the problem is just how far it is. It’s weird to think that a neighborhood within a city can feel so far from that city. If you haven’t been to the Heights you get on the 1 train and you take it forever. About thirty stops after where you thought the city ended you're in Hamilton Heights. About ten stops after that you're home. We got a little soured on the neighborhood shortly after we got robbed. Perhaps that’s not fair. People get robbed all over the place. I’m sure I’ll be an easy target no matter where I go. There's other things to hate about it. But the distance is a big part of it. Because it's so far it's a pain in the ass to go anywhere. So you stay around there and realize there isn't shit to do up there. So that’s why we ended up moving.

On New Year’s Eve we packed up all our shit and moved on over to Astoria. I’m sure I’ll like almost everything better about Queens. As I said there’s a lot to hate about The Heights. Shortly before we moved I realized that our neighbors had developed an adorable little habit. There was at least one person in our building who faced with a baby with a dirty diaper would take their baby’s shitty diaper and just TOSS IT OUT THE FUCKING WINDOW! I still have trouble wrapping my head around the fact that a person can be that big a piece of shit. I’ve always tried to be a good liberal and not think of people as being lost causes, but it’s hard to think of people like that being capable of anything but making the world a worse place wherever they are. It's also nice to know this person has bred and is instilling the same values they have into their little bundle of joy. I say “people” and not “person” because this is not an uncommon thing to see uptown. A lot of buildings that are up against parks or just a little bit of empty space will probably be filled with diapers eventually. My wife and I were walking and marveling at one vacant lot’s giant pile of diapers. I gave the residents of that particular building the benefit of the doubt. I thought maybe a few dozen garbage bags filled with diapers fell out of a garbage truck and exploded there. Just as I was thinking this someone tossed something out of their third story window. It landed with a thud. It was a dirty diaper. It’s not the majority certainly, but it’s common enough to want to wall off the neighborhood.

Also despite what the NYPD’s 33rd precinct will tell you, this:

is not a “rare occurrence and their working on finding these perpetrators who just came out of nowhere.” Every. Fucking. Day. Sometimes it’s neat to watch someone do cool tricks on a motorcycle. More often than not though I’d usually just stare and hope they fall off and die.

However I don’t want to be all gloom and doom. It was my home for three years and a portion of me will really miss the neighborhood. I’ll admit there are going to be a few things that I’ll miss about the Heights.

For starters it’s above sea level. Not just a little above sea level, but it’s Manhattan’s highest natural point. I like that in a neighborhood. During Sandy a couple years back as I had friends floating through their lobbies I was safe, sound, and dry as a bone. Both the bodega across the street from our place and our favorite sandwich shop remained open the whole time. I didn't even realize it was gonna be that big a deal. My family sent my wife and I some money because they thought we were in dire straights and just too proud to ask for help. We bought a new vacuum. It's pretty nice. Our apartment did get this weird bubbling on our wall, but our super didn’t seem too concerned so we weren't either.

My barber, Angel at The St. Nicholas Barber shop at 185 and St. Nick, is going to be hard to replace. He was a rare specimen. I left Michigan for a lot of reasons, frustration with my barber was not one of them. We had a good thing going. He was this Russian guy who worked the LA Clips on Southfield Rd. I have no idea what his name was, he had no idea what mine was. We never spoke. It was great. I struggled to find a decent haircut  when I first moved here. I got two in Queens. The were terrible. I went to a Fantastic Sams downtown. It was weird. They played loud dance music. When I told the lady what I wanted she said okay then just did whatever the fuck she wanted. Without my glasses I have no clue what they're doing up there. At the end she said this was better than what I wanted. I don't want to look better. I want to look like me. I went to an old guy who’s place was right next to my building. As I sat down he asked “shorter?” and I knew I was in trouble. He butchered my hair and took a few inches off my neck and ears to boot. Then I found Angel, and that's his name and who he is. First time in there he asked if I wanted the usual. I said yeah, and that son of a bitch was 100% right on what my usual was. Him and his usual became my usual. Another great thing about Angel, he’s not a big fan of the small talk. I think that may stem from the fact that he knows very little English. Actually, I have no idea how much English he knows, that’s how little small talk there is with him. On my second trip I was wearing a Detroit Tigers hat when I entered. Angel asked if I was from Michigan. I told him I was. He then said “I went to Wisconsin once.” That’s it. That was the most we talked in about 15-20 haircuts. If you find yourself north of 155th St., I cannot recommend him highly enough.


I had two different pizza places I frequented. Both of which I’ll miss for different reasons. If I wanted to sit down for a couple minutes and eat some pizza with pretty good toppings but mediocre taste, I’d go Pie Pie. If I wanted to have a larger better slice, but not sit down and I also wanted to listen as drug dealers and teenagers scream at the top of their lungs and call each other the n word, I’d go to West 190th Pizza. The pizza is far better at West 190th, but the ambiance leaves a little to be desired. It’s just a small seatless area. I assume that’s to discourage loiterers. It doesn’t work. It’s usually packed with people who call the entrance to the subway their home. These are the usually the kind of people I stay away from. But goddammit they make a pretty good slice.

If you ride bikes in this city and you’re as horrendously unmechanical as I am you’ll need a bike shop you can trust. Tread is that shop. More than a few times I thought I needed some heavy work done to my bike, almost every time it always ended up being something small that ended up being insignificant. They have a sales staff who seems to know their shit (I guess. I don’t really know my shit, but they seem to know a whole lot more than me). Many a time I was just in the area and went in to wander around. The folks there were always good about chatting bike shit even though I wasn’t there to buy anything. I’ve gotten three tuneups on my beloved Serenity the past few years and the two of us will miss this place. I doubt I’ll end up riding up there for future work, but if you live uptown treadbikeshop.com. You and your steed will be happy you did. Also if you have a Astoria / Long Island City bike shop you love, let me know. 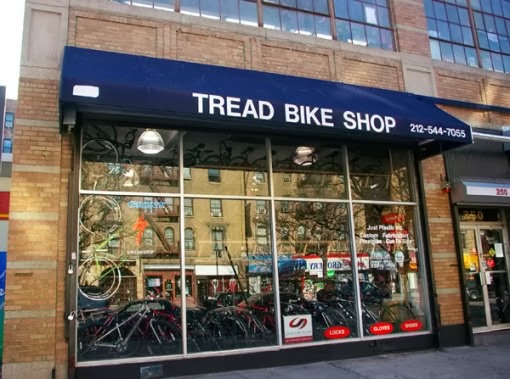 In the middle east the Golan Heights has been a tremendous point of contention for decades. In Washington Heights the matter is settled. Jews control this restaurant and from what I can tell G*d himself must have a hand in making these sandwiches. They are fucking nuts. I went to this place on numerous occasions and it’s just great. If you only have a couple bucks I would go with the hotdog pita. It’s just beef franks diced up with hummus, fries, Israeli salad (DO NOT refer to their Israeli salad as Lebanese Salad even though they’re identical!), and fresh sauces. If you’ve got a few bucks get either the falafel or the zaidies chicken on laffa bread. It’s amazing. If you’re planning your trip try to go on the holiday of Purim. I don’t really know anything about it other than the fact that the block Golan Heights is on and the restaurant itself becomes packed with blackout drunk Yeshiva students wearing silly costumes.

And finally there's the photo shop that routinely displays things like thiss:

Thanks for the memories Washington Heights!
Posted by Adam Sokol at 1:34 PM No comments:

I Had A Dream

I generally tune out whenever anyone starts a sentence with “I had the weirdest dream last night,” because what’s coming is usually gonna bore the shit out of me. Luckily for me my dreams are much more interesting than yours so here goes. I had a dream the other night where I was talking to a friend about how shoe sales had dropped "precipitously" since 1995. He didn't believe me. I told him I heard it on a podcast recently. It got pretty heated. I woke up and immediately grabbed my phone to look up shoe sales in the last twenty years. Turns out it was all dream horse shit. From what I can tell shoe sales have remained constant, if not grown since 1995. I was unable to find a chart that had the total number of shoes sold since then, but all the charts I was able to find show steady growth. I went through my old podcasts to see if I could find anything about the shoe industry to no avail. I was about ready to give in and text my friend to concede the point on the shoes. Then I remembered that the guy from the dream was just a guy in my dream. I didn’t know him. He wasn’t even a dream version of someone I knew. He was just some stupid dream stranger I’ll never have to see in real life. So I felt better and went back to sleep and had a dream that I got a sail for my bike. It was pretty neat.

Posted by Adam Sokol at 1:34 PM No comments: