Nothing You Valued Is Valuable


I'm currently in Michigan for a couple reasons. In addition to doing some shows I figured I'd also secure my financial future and become wealthy. I planned on going through some old Magic: The Gathering cards and strike it rich. I saw a YouTube video where some guy finds a twenty thousand dollar card going through an old pack and rightly loses his shit. So I figured I'd go through some old cards, find a rare card, lose my shit, and then buy a bunch of stuff.

It didn't work out like that because why the fuck would it. So I took the Magic cards and just put them in their place next to my Marvel trading cards, comics, baseball cards, and football cards--all things my friends and I believed were gonna make us rich. None of these things will actually make any of us rich. The very fact that everyone was told how collectable these things were almost automatically negates their value in the long run.

As a guy who took two econ classes at Oakland Community College, I think I'm qualified to speak to this. Everything we were told was going to have value won't because we were told it was going to have value and acted accordingly. Also we assigned too much value to them to begin with. The value will never be higher than I thought the potential value was going to be. You got little plastic cases to make sure your cards didn't lose value. The fact that all your friends got little plastic cases ensures that there never will be any value. The reason that Honus Wagner's rookie card is worth a couple million bucks has less to do with Wagner and more to do with the fact that it's the only one of about five in existence. It's not because he was the greatest player. It's a valued collectable because at the time it had no value and wasn't collected.

As soon as the interest for baseball cards became apparent, multiple companies filled that void and started making a shit load of them. Part of the reason these cards will never be worth anything is the market flooding these companies did when interest peaked, but it's also that we went from putting baseball cards in our spokes to putting them in non acidic plastic casing. Who's going to pay top dollar for a specific baseball card when everyone who could want one already has it in pristine condition? When the X-Men debuted a second series with five different covers of the number 1, I bought or traded for them all. So did millions of other kids my age. As soon as we got them we put them in polyurethane bags with cardboard backers so they wouldn't get bent. Then thought nothing of tearing open all my ninja turtle toys because what kind of monster keeps all his toys in the original packaging? A rich one. A rich one who has amazing self control, but has never enjoys a goddamn thing.
That's another reason as to why everything you spent collecting won't be worth what you think it should be. You spent time collecting it. You'll always inflate the value of what you've collected because you spent the time collecting it. You remember being swindled and swindling and scheming so you could collect as many Lou Whitaker cards as humanly possible. When it's time to sell, you're not just parting with all your Sweet Lous, you're also selling part of your childhood. Selling your childhood to some asshole who wants yours. And he's gonna lowball you, because there's no way he'll put the same value on the time you spent collecting as a kid as you will.
That's it really. Just something I was thinking about. I'm pretty sure it wasn't funny, but hopefully it made sense. I'm just trying to say that whatever you collected, whatever you valued, won't have value. Unless you and everyone you know throws them away. Unless of course we're talking about my pogs.

GEICO: Proudly Doing Nothing For A While Now

I've always thought that I'd be good at advertising. For starters I don't have much in the way of a soul. Also I'm good at making vacuous statements that sound like they mean something but really don't. I wasn't sure where to take my talents, but I'm thinking whatever ad company GEICO uses will be the place for me. Of all the shitty noncommittal statements used by companies to get you to buy their stuff, you'd be hard pressed to top GEICO's "proudly serving the military for over 75 years."That might be the emptiest statement that's ever been uttered in all of advertising. When they say they've been serving the military for 75 years, one can only assume that the company has been around a lot longer than 1940 and that they treated the military with general disdain before then, otherwise they would say it. So WW1 on back, GEICO was (probably, given how they worded their commercial) unsupportive of our nation's military. It could also mean that the company came into being around 1940 so wouldn't have been around to be either pro or con the troops, but who has the time to look a fact like that up?
From what I can tell in the ad, all they're bragging about is not turning away soldiers as potential customers. They've also been serving Nazis, communists, board game cheaters, people who take a penny when not in need of a penny, thieves, and pedophiles for the same 75 years. I'm not saying that GEICO can't be happy about doing special shit for the military, but they give no indication of what they do aside from getting their insurance needs filled. I guess that's something. But they don't say that they do anything aside from taking their money. If they did go above and beyond you can bet your ass that the stupid gecko would be shouting it from the rooftops. Most companies will spend ten dollars to let you know they did something worthwhile with a dime.
So when they're bragging about how they've been serving the military since whenever they fuck they came around, all that's saying is: "you know the military? You like the military? Well guess what, we're not opposed to taking money from them!" It's not like they're bragging about insuring the actual military. It would be one thing if Iraq and Afghanistan were no-fault insurance states and GEICO was just losing their shirt on blown up Humvees and whatnot, but from what I can tell that's not the case.
Don't get me wrong, I'm happy for the military that GEICO doesn't make a habit of spitting in their face and turning them away. It's also good news for the fine folks who work at GEICO, because not serving military personal would make their job harder. Every time they gave a quote they'd have to ask at one point "hey, we'd love to provide you a service in exchange for money, but you're not a military person are you? Because if so I'm afraid I'm gonna have to tell you to go pound sand." What they seem to be saying is that they're proud to do absolutely nothing since 1940. I just don't think not turning someone away based on their profession necessitates a multimillion dollar ad campaign. So to help them out for the next campaign I've provided my portfolio which includes more statements that don't mean a goddamn thing. I await your call. 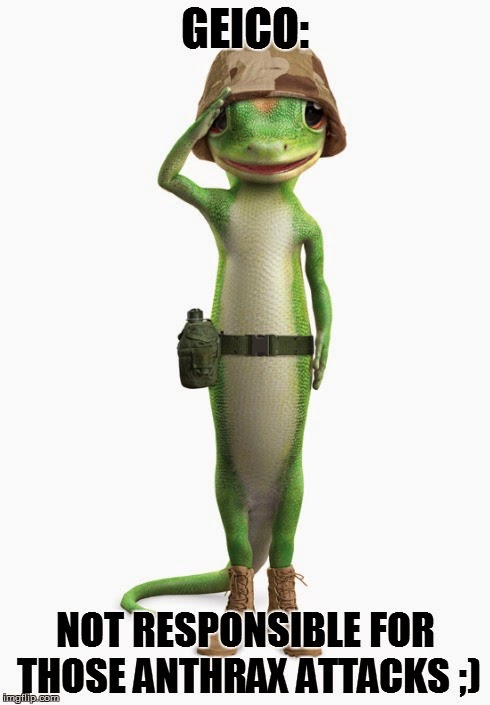 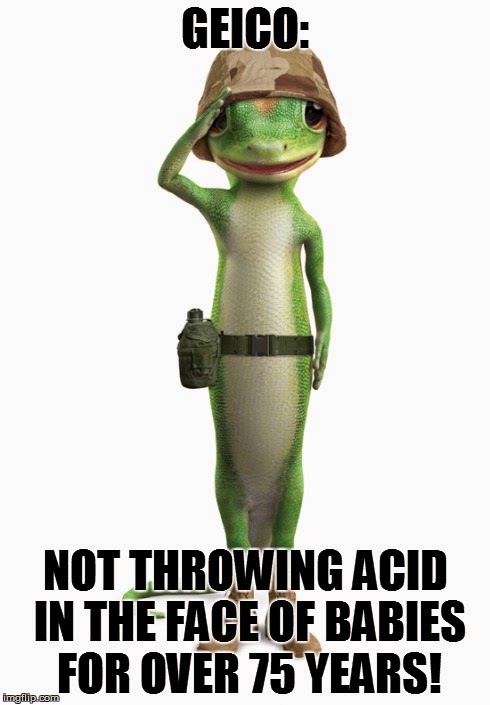 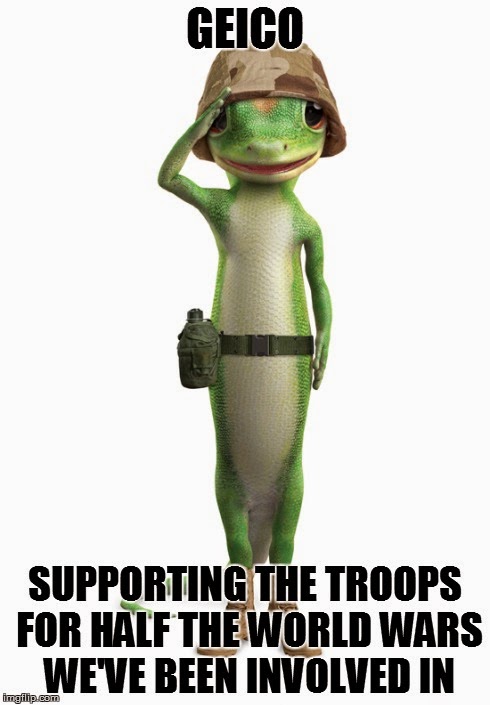 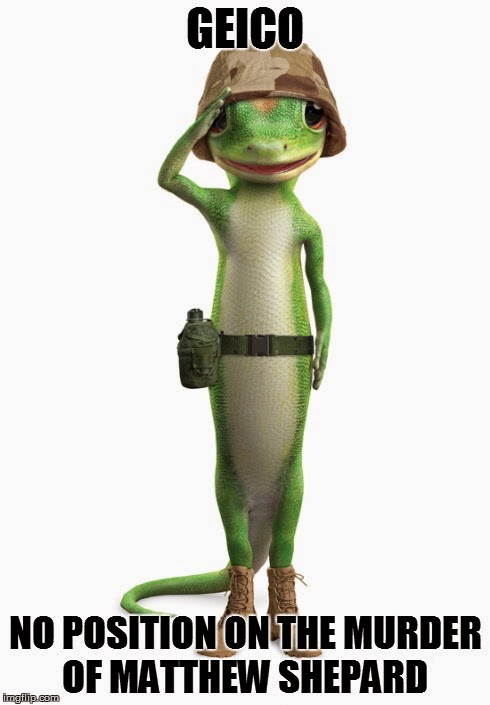 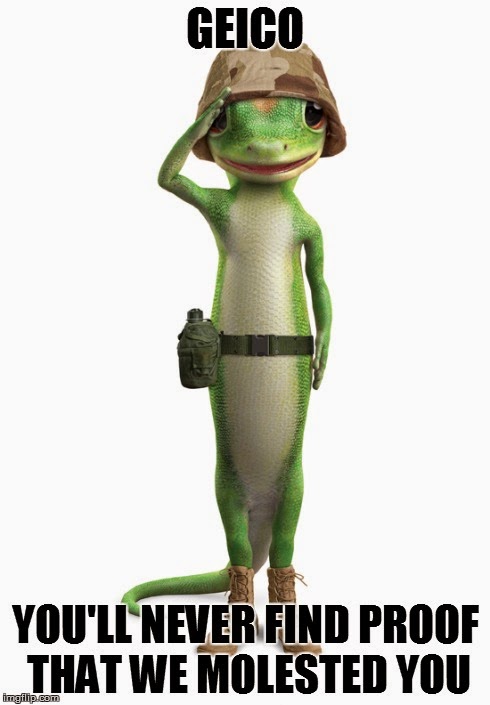 
When I was just a wee lad I made a scrapbook. It was one of those big photo albums with sticky pages that you unfold the clear sheeting on. I kept pictures in there for a while but I was a little kid. Everything worth remembering had pretty much just happened. Plus I didn't really have all that much I needed to remember anyhow. Also my folks were pretty good about documenting what needed to be documented. When the first Gulf War started I decided to use that photo album and  make a war scrapbook. I was born in the 80s. It wasn't the first time there was a war in my lifetime. America had been giving someone the business for just abougt about my whole of my life up until then, but this was the first time the media really gave the war their A game.

I was pretty sure that this war was a pretty big deal. It was the first real news story I can vividly remember. I remember wanting to do something, but because I was just a little kid I didn't know what to do. My sister drew a peace sign on her trapper keeper. That seemed to work for her, but I wanted to do more. So I decided to document the war for future generations via a scrapbook. I'd thought that this war might be the war that ended all wars. At least hoped it would have been the war that ended all wars in Iraq. Very minimum I should have hoped that Gulf War 1 would be the war to end all wars between a Bush and Hussein. But hey, war mongers gonna war mong, and since it's now called Gulf War 1 it obviously was the war that didn't end much of anything.

So that's what I did. For the rest of the war I went through the paper every day. I went through the front page, back page, editorials, and even some heavy handed shitty political cartoons that I never got. If it was about the war I collected it. By the end I had a pretty solid scrapbook. I was pretty proud of it. I honestly thought that my scrapbook would help people remember what people thought about the war as it was happening.

The next year I watched my first episode of Star Trek: The Next Generation. It was awesome and I got into that pretty hard.  I taped every episode while I watched them and then rewatched them until the next one came on. I read the shitty novels. I collected the action figures. I was pretty happy with how into Star Trek I was, but I thought I should take my fandom to the next level by documenting it with a scrapbook. The problem was I only had one scrapbook. Instead of asking my parents for a new one I just started slowly replacing the war clippings. Mid way through season six I'd completely replaced every piece of war news with Trek clippings.


I'd forgotten I'd done this until recently. I remembered and felt kind of shitty. I felt shitty because that's a shitty thing to do. A year or so after vowing to make sure nobody forgot something, I'd pretty much completely forgot about it because of some pop culture distraction. But really that's the most American thing I could have done. I'm forgetful, ignorant, and easily distracted. I will shout from the rooftops about what you're supposed to remember and then I'll immediately forget it myself, and then eventually I'll probably repeat it.