Good Trek / Bad Trek #5 Where No Man Has Gone Before

The world is still garbage, but here we are. More Star Trek. I linked to this on Facebook. Facebook is going through some shit right now. They’re starting to go after fake news, which is probably for the best. Fake news is bad news. You shouldn’t share it or take it in. I’d say any news source that needs to remind you how smart you are for taking in that brand of news is bad for your brain. I don’t know if it’s possible to ban fake news. It’s only out there because people want to believe it. It’s a demand-side issue that will always find a supplier so long as those folks are out there. So really we should be banning those people from Facebook. Also, we should be banning all of us from Facebook. It’s not good for you and you know it. That being said, Facebook doesn’t have any rules against Star Trek reviews (yet), and you’re probably only here because we’re social media friends and you're bored at work, so what the hell do I know. So social media does do good things, like spread awareness of this here blog.

This week’s episode is Where No Man Has Gone Before. Though not being too familiar with TOS episodes this one is pretty famous. I had seen it before, and even before I saw it the first time I was familiar with the episode. The original pilot episode, The Cage, was rejected by CBS on account of it being just absolute garbage. So Lucile Ball had to convince the network brass to let Gene Roddenberry take another stab at it. This was the second pilot. What I don’t get is that if the execs thought the original pilot was too cerebral and lacking action why would anyone think that this episode would be greeted any differently? It has a lot of the same problems. It’s definitely better than The Cage, but not by leaps and bounds. So anyway here goes.

The crew of the Enterprise is headed towards a distress signal of an old ship that’s been missing for centuries. So that means this ship, the Valiant, decided to head out of the galaxy hundreds of years before anyone else possibly could and just never mentioned it to anyone. Regardless, looks like it didn’t go well or we wouldn’t be hearing a distress signal. Kirk and Spock are passing the time with a good new fashioned game of space chess. Spock is being a douche about it, and pretending that acting logically means pretending to not know what the word “irritating” means.

They find the distress signal and turns out it’s not from the ship itself, but from its space black box. They investigate and turns out the Valiant’s black box is full of clumsy foreshadowing. There’s a bunch of gobbledygook about ESP and that the captain ordered his own ship destroyed. That leaves us to wonder if anyone on the Enterprise will have something happen to them to give them ESP abilities. Luckily we only have to wait about 45 seconds. They go through an energy barrier and it knocks out Gary Mitchell and Dr. Elizabeth Dehner. Kirk wakes up Gary, but now he’s got blinged out eyes, and the heavy-handed score lets us know that this is not a particularly good thing.

Turns out with glitter eyes comes glitter power. Like making your medical instruments make you look either very healthy or very unhealthy. Also, you can kill yourself? I can see being able to kill yourself, but if you’re dead how is it you will yourself undead? You are dead. You don’t need glitter eyes to see how much sense that doesn’t make. Did he set a timer maybe? I don't know. Mitchell makes a big stink of knowing it was Kirk who entered the room like he’s showing off his new powers. Like the ability to know who has entered a room after they’ve already entered it is all that impressive. He can also read fast now. So the ominous music seems a little drastic in relation to the powers he’s shown so far.

The next 12 minutes pretty much suck. They’re just walking around saying what we all know. The dude has abilities. He’s getting powerful. He hasn’t really done anything yet, but Spock is pretty sure they’d be right in murdering him. They decide to split the difference and instead maroon him on a deserted planet while they’re fetching some power packs. Dr. Dehner seems like she digs the new superior race of glitter men.

They lock him in a force field cage. He kills a dude and gets out. Kirk evacuates everyone but himself and for the second time in two weeks, he decides he should fight a being with godlike powers. I have trouble believing that he would’ve survived this far into his command. The fight doesn’t go well. On account of Mitchell now being god and Kirk just having his boyish charm. Mitchell informs Kirk that he’s a god now and then really gives him the business in a fistfight. Dr. Dehner realises that she doesn’t want to start a new race of super beings with Mitchell so they use their powers to turn each other purple a few times. This weakens Mitchell enough to wear Kirk can fist fight god. Yeah. Eventually, Kirk realises that the only way to defeat a god is by burying him in rocks and that’s about it. Dr. Dehner apologises for being turned into a superior being who doesn’t want to be murdered for evolving too quickly and then for some reason she just kind of dies.

Does This Episode Suck?

Yes. It did. It seemed okay at first. I went in not being too familiar with TOS episodes, and I went in hating Kirk but loving Spock. I have to say Kirk is growing on me and Spock is kind of shitty so far. I know I’m only four episodes in so I’m sure that changes. Shatner has a level of charm that makes him easy to like so far. Spock, on the other hand, has acted like a horse’s ass. Mitchell gets his glitter powers and immediately Spock thinks they should kill him. You’re a goddamn scientist on a mission of discovery and your immediate reaction to a never before witnessed phenomenon is to murder it in cold blood. Jesus dude. Plus, everyone knows that Vulcans some level of telepathy so why is he shitting his pants at the thought of someone with ESP abilities? 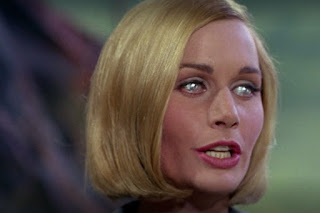 I read that the actor who played Mitchell had a problem with the contacts that made his eyes look all glittery, and oh holy shit does it show. I can’t imagine that they spent all that much money on those contacts where they just had to stick with them. It’s also not like the effects look that awesome where they needed it. It looks like shit. And his dumb eyes look like they’re about to rot out of his head.

Another takeaway from this episode is to say fuck the orchestra. It is overpowering as shit. I hope that’s something they get squared away soon because it is SUPER distracting. It’s so loud and they give every little issue the same overbearing ominous music.

The worst part about this episode though is watching it knowing that it was supposed to be the second pilot. In that way, it does not even work a little bit. There’s no introductions. I know exposition can be clumsy in pilot episodes, but all you get is Spock not knowing what “irritating” means because he’s a logical alien with a small vocabulary. Other than that we learn almost nothing about who any of these people are or why they’re out in space aside from just trekking for the sake of trekking.

Hide and Q: I don’t know why’d you want to watch a worse episode, but if you are so inclined I'd check out the TNG episode Hide and Q. It’s a first season stinker. In it, Riker is given godlike powers by Q. It’s a real piece of shit. The only thing that makes Hide and Q better than Where No Man Has Gone Before is that when Riker gets his Q powers nobody pulls a Spock and starts plotting his murder.

Where No One Has Gone Before: You should watch this one if you want to watch a garbage episode of Star Trek, but you care a lot about gender neutrality in episode titles. But seriously another season one TNG piece of awful. So don’t actually watch this one. It is very very bad.

A member of the crew getting powers isn’t something that happens all too frequently from what I can recall, and when it’s done it’s usually a shitty episode. The one I can think of that I really enjoyed was a second season episode of Voyager titled Cold Fire. It’s a rare Kes centred episode, and even rarer in that it’s a Kes centred episode that doesn’t suck. I always thought that Jenifer Lien’s Kes got a raw deal. She was given nothing but horse shit for three seasons and then fired because the writers were shitty about giving her anything for her to do.

In it Kes meets some other members of her race and they help her tap into her telepathic and telekinetic abilities which quickly get out of her control. A lot of similarities to Where No Man Has Gone Before but so much better. Kes gets new abilities, and even though Tuvok almost gets killed by her new found abilities he treats it like you’d expect a Vulcan would. He’s cautious but finds it fascinating. Also as Kes is getting stronger and stronger she’s seems genuinely pumped and kind of scared by her new powers and what she’s becoming. Mitchell seems like the mostly bored by the fact that he now has amazing powers.

So that’s it for this week. Next week is The Naked Now, otherwise known as the shirtless Sulu sword episode.
Posted by Adam Sokol at 11:49 AM