Intro: I’ve loved Star Trek since I was a kid. I started by watching TNG in 6th grade. I’ve been a fan since then and though I’ve spent a lot of time watching Star Trek, I’ve never watched The Original Series. So, I’m watching and reviewing them as a fan of Star Trek, but one who's never seen any of them. So I’m watching all the TOS episodes for the first time and saying whether or not they suck. At the end, I give examples of better Star Trek to watch that remind me of this episode. That’s it.

Big week across America. The world too I guess, but mostly America. We had the calendar turn over. Lots of folks were pretty happy to see 2016 go. It was a weird year to be sure, but some people seem to think that now that it's 2017 Americans are going to get better at voting and celebrities are going to stop dying.  Seems a tad simplistic. Yes, a lot of icons passed away. It was very sad. But the ones who didn't are still marching towards the end. It’s not like just because Billy Bragg managed to stay alive last year that means he’s home free.  Celebrity deaths work like one of those quarter pusher games at casinos. Every year is a push. Most years a couple fall down. Every year quarters are added and subtracted. I guess that analogy implies when celebrities die we win which isn't the case. I think what I’m trying to say is that every year brings a quarter you really care about closer to falling off the edge. It’s always sad. So get ready. A bunch of icons died last year. A bunch more are getting closer to death. So be ready. Also, I watched the Dagger of the Mind this week. It features a lot of people who managed to stay alive last year. And Leonard Nimoy who died in 2015 before it was cool.

The gang is at a prison colony. They beam something up. You don’t have to wonder if this is going to kick off the plot for long because almost immediately it’s revealed that there’s a prisoner hiding in one of the crates they’ve just beamed up from the surface.


There’s a showdown, and the prisoner is not a prisoner, but a doctor who used to work closely with Dr. Adams, the man in charge of the prison planet. McCoy is suspicion. Kirk and Dr. “Please don’t call me doctor” Noel. Go down to the surface to see what’s what. Things seem a little fishy, but Kirk does not seem too bothered by it.

He should be because this bad shit is going on. Dr. Adams has gone crazy and has been using this bright light thing, called a neural neutralizer, to control people’s minds. It started as just a thing for the patients, but then he went all in and decided to mind control everyone who crossed him. Adams tries wiping Kirk, but (don’t call me Dr.) Noel manages to shut off power to the neutralizer. Dr. Adams’ mind gets wiped when the power comes back on. So now he’s dead and the Enterprise leaves the prison planet, hopefully after notifying someone that a bunch of prisoners need to be fed and looked after at this prison colony.

Mixed. It’s not great. I’m starting to think that it’s just me. It’s a relatively well-regarded episode of Trek. I thought I was going to like it better than I did. I was able to sum up the plot in three paragraphs which was a nice surprise. There wasn’t a whole lot of batshit divergences that don’t go anywhere.

Kirk is not at all bothered by the fact Dr. Adams is using something called a neural neutralizer. That's a scary sounding device. I don't like how accepting Kirk is with mind wiping and control. That's a pretty dangerous piece of technology.

It’s not that women wear short dresses on the Enterprise, it’s that they’re just not wearing any pants. Dr. Noel, who does not like being called Doctor. It’s very evident with her.

This is the first time I remember getting to see a mind meld. They’ve been used as a shitty plot contrivance on more than one occasion. It leads to the mess of Star Trek 3. But it does add the psychic abilities to Vulcans which plays in a lot in the future. 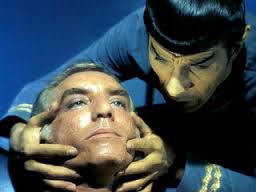 We get mind control, we got ladies without pants, we have heavy-handed lessons on prisons. This episode has a lot going for it. I still don’t think it was great, though. It tried. And among all the bad Treks, this one is the closest to being good. It had everything going for it, but still, these are just not easy to watch. Maybe TOS is something I’m just not supposed to get into. It was mostly Kirk. That's part of the problem. I started writing these hating Shatner and thinking that he was just a garbage actor. A couple episodes in and I started to like him. I was right the first time. He just sucks.

I will say this in support of this episode, and that’s that I’ve complained about how most of these episodes take forever to get the plot going. Not this one. About 15 seconds in and we’ve already got a crazed maniac running around the Enterprise. So, kudos to the writers for their lack of dicking around this go round. Hopefully, this is something they keep on doing because there’s a lot of essentially dead air in these early episodes.

I like what they were trying to do. So I’ll give them credit for that. But I wouldn't recommend. What I would recommend is...

This two-part episode features a Starfleet captain being held prisoner by a madman who tortures and tries to control his mind by shining a light (or four) in his eye. You want to see that done better then the list begins and ends with the TNG episode Chain of Command. Jesus H. Christ is that ever a good episode. Two of the best TNG episodes ever which easily puts it in the running for some of the best Trek to ever see the light of day. This episode has everything. A naked Patrick Stewart acts the shit out of it. He just kills it. Both when he’s standing up to his tormentor and when he’s on the verge of breaking. You actually get to some unsavory aspects of The Federation which is a TNG rarity. Also, someone finally tells Troi to get into a standard fucking uniform. I mean, for Christ’s sake lady. You’re a goddamn officer on the goddamn Federation flagship, get out of those silly pajamas and get into standard issue Starfleet pajamas.

That's it for this week. Next week we got The Corbomite Maneuver. Also, I was kidding earlier. Billy Bragg isn't going anywhere ever. He's too fucking awesome.