Good Trek / Bad Trek #14 The Conscience of the King


The world is still going (gone?) to shit which is nice. The Oscars were last night. I didn’t watch them because I never do. They're dumb and boring. I don't get why anyone would care whether someone gets a stupid award. It's nice that people are excited about how they're getting better at diversity, but since the last movie I saw in theaters was Sausage Party I don't really think that I'm in any position to talk about The Academy or the state of film. Sausage Party was not bad, for the record. Not awful. But not great either.

It's been a couple weeks and I feel bad, but I was working on something else. I don't owe any of you an apology because you don't pay the bills, but whatever. The other thing I was working on also won't pay the bills. From my experience, nothing will ever. In my experience, most of comedy is working really hard on something and then sending it someone who didn't ask for it. Then 99 times out of 100 they don't do shit with it because they didn't ask for it and don't really want it. So why would they?

Nobody really asked for me to write about the Trek either, but here we are. I really didn’t feel like watching Trek today. I was talking about Dollhouse last night and now I kinda want to watch that. It’s a solid show, but I don’t think that I can do twelve episodes of Star Trek and just switch this over to a Dollhouse blog all of a sudden. Plus. There’s only a couple seasons of Dollhouse (a couple solid seasons). So there’d be no Good House / Bad House. It’s all pretty goddamn good. Also, if I named something Good House / Bad House then people might assume it’s about that show House. Which I hated. I only watched it a handful of times but it was enough to realize that it was not for me. If you're a House fan, that's fine. Just not my thing.

I'm getting sidetracked a lot here. I watched The Conscience of the King today and it was pretty goddamn good.

Kirk thinks that an actor in a traveling theater troop named Anton Karidian might be an old despot named Kodos who killed a bunch of Earth colonists twenty years prior. People think that he's been dead for years. Kirk's buddy convinces Kirk to look into it. He tricks the theater troop into relying on the Enterprise for a ride to their next gig. Which is good for two reasons. For starters, it'll give Kirk a chance to look into the actor/despot. Kirk is also sweet on the actor's daughter, Lenore Karidian. So he can get his flirt on too.

The actors are there it's revealed that only two people are able to recognize Kodos. Kirk and a lowly Lieutenant. Shortly after they realize that only those two would know him. Seems a little weird that there's only two people in the galaxy that can identify this character. But I guess people who would recognize him have been disappearing for years. Seems every time this theater troop around one of them, they end up being murdered. Murdered most foul. Then someone tries to kill him. So this guy is probably definitely Kodos. Meanwhile, things are really heating up between Kirk and Kodos' daughter.

Someone tries to kill Kirk, so he confronts Kodos. Turns out the daughter is the one who tried to kill Kirk and the young Lieutenant Reilly. She was trying to eliminate all the folks who may be able to put away her dad. Makes sense. There's a struggle and she accidentally kills her dad. During a performance of Hamlet. A little too much, but still.

Yes. This one is solid. I think I still want to get back into Dollhouse, but even though I didn’t want to watch this episode it was some pretty goddamn good TV. I’m not saying this is the best episode of TOS I’ve watched, but this is when Trek is at it’s best, but it’s an hour-long drama that’s set on a spaceship. It was really enjoyable. I like the chemistry between both Kodos and his daughter. I believe that he genuinely seems to care for her. I don't really get that only seven people getting eyeballs on Kodos can put him away. That doesn't really make a lick of sense, but who gives a shit, it was a hell of a ride.

I like to think that in the future theater troops are at the whim of whoever can give them a ride. Because fuck them.

I’d like to know if Yeoman Rand and Lenore Karidian had met before this. Usually, a look like this requires some history. 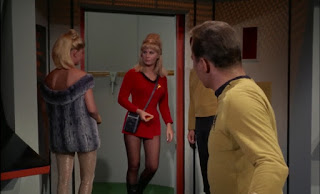 Star Trek characters always have a thing for Shakespeare. I don’t. I have trouble thinking folks a few hundred years in the future are still doing Hamlet in traditional garb. If they want to watch something great from Earth's past, I think they should check out Star Trek. It's pretty sick.

I like how Spock realizes something is up with Kirk and it just pisses him off that he doesn’t get to know. Sorry Spock, you don't get to be in on everything. Maybe you're not as smart as you thought you smug piece of shit. (Just kidding buddy, you're the best Spock)

Don’t really get the whole Uhura singing. She’s great. Her voice is just fine, but good gravy does it kill the flow of the episode.

Kirk calls for a "double red alert." I love that. Double red alert. You know how red alert means the ship is in immediate peril? Well, like that but TIMES TWO!

If you're looking to see a woman try to wipe a bunch of folks off the map at her personal expense then this is a good one. I'm trying to decide which one is better, and I think it might be the TOS one.

This is a better early DS9. Kira is one of the best characters that DS9 gave us and this is one of her better episodes. Least one of her better early ones. There were more than a few missteps with early DS9. There's usually missteps with early seasons of any Star Trek. This is an early gem, though. Kira meets the man she feels is responsible for countless Bajoran deaths. If you haven't seen it, I don't want to give too much away, but it's great. Better than this episode even though this one was good.

You know the whole run is really solid. Just give it a watch. I wish now that Joss Whedon can do no wrong they’d make him go back and redo all the stuff that got canceled too soon. I've never seen Buffy. I probably should get in on that some day. I bet I'll enjoy it. But seriously, treat yourself and watch some Dollhouse in addition to Conscience of the King.

Next week we get to meet the Romulans for the first time. Should be good.
Posted by Adam Sokol at 5:50 PM