Haven’t done one of these in a while. Been busy. Did some shows in Michigan which were fun. I got to stay at my sister’s house. A lot off people talk about how great living in New York is, and I do think it’s pretty neat for the most part. But for all the great things about living here, it should be pointed out that my sister has a machine that washes her dishes. It’s amazing. She might as well live in the future with that shit. I emptied the dishwasher while she was gone and she said: “hey, thanks for doing the dishes.” I didn’t. Your robot maid did the dishes, I just was there with the assist.

None of this is a reason to not recap Star Treks. My sister also has the internet, and I had a computer with me so I could’ve easily pounded out a quick Good Trek/Bad Trek. I did not though. I even watched Star Trek while I was gone. I watched a bunch of DS9 episodes, all of which were a shit load better than this piece of shit. So here we go. Even though this is actually pretty similar to a DS9 episode.

It’s particularly shitty because Balance of Terror is really one of the all-time great Treks. This episode is not. It was Shore Leave, and it was garbage. Kind of fun, but largely garbage.

Doctor McCoy is on a planet investigating its suitability for shore leave. Hence the name I think, which is Shore Leave. It seems fine, but then shit gets a little bananas. McCoy sees a giant white rabbit and a little girl who looks like Alice from the Lewis Carol stories. He can’t believe what he’s seeing, and nor should he. Especially since it’s all pretty nuts. It was supposed to be an uninhabited planet and now there’s a bunch of storybook characters running around. That’ doesn’t jive.

Kirk and Spock go down to investigate and turns out that the planet is reading their thoughts and conjuring up visions to match them. It’s all pretty nuts. Kirk fights his old college buddy who's a walking Irish stereotype, a yeoman nearly gets raped by Don Juan, and McCoy gets killed in a jousting match. Come and find out that it’s vacation planet. So both the attempted rape and the murder of McCoy don't count. They meet the dude who is in charge and he apologizes and lets the crew have at it. The crew decides to hang out and vacation there. Except for Spock who wants to be a fuddy-duddy instead. The end.

Not particularly. It got the job done but just seemed a little too silly. It has to be said that Gene Roddenberry didn’t seem to think that highly of the Irish. Don’t get me wrong I also don’t think highly of the Irish. I’ve said it before on this very blog, but people who are proud of being Irish are the absolute worst. Don’t get me wrong if you’re from Ireland that’s fine. Be proud, I'm sure the place is great, I’d love to go sometime. Hell, if either of your parents is from Ireland. Have at it. Be proud. But Roddenberry seems to be of the belief that anyone of any Irish ancestry is just one shot of whiskey from immediately becoming a drunken leprechaun. This is the second time that he’s snuck in an Irish acting like a bunch of drunken monsters scene into the show. There’s also an early TNG episode where we do the same thing. Don't know if Roddenberry was behind that one, but there are two instances right off the top of my head where I can think of Trek making the Irish look like monsters. I’m sure there’s more. It almost makes me think that Miles O’Brien was invented to make up for the fact that they were so shitty to the Irish before that. It’s particularly funny considering the general progressiveness of the show. In the future, we’re all one and will explore the universe in a spirit of togetherness, unless the dumb Irish come out and fuck shit up. We’ve really advanced as a society expect for you know who. They even break out like a shitty Irish are drunken sacks of shit theme music. Just seems a little squirrelly is all, but what are you gonna do.
Two other pretty big problems in terms of race and gender. Sulu is just walking along and gets attacked by a samurai. Of course. The planet can read people's thoughts so Sulu was thinking about samurais. I'm sure he's always thinking of them. On account of he's Japanese. Also, Yeoman Barrows almost gets raped. That's what her mind conjures up. She's on a beautiful planet and her mind just wanders to hopefully getting raped. Pretty yikes.

The whole thing with the vacation planet seems a little weird. Yeah, I know that space is the final frontier and a lot of the places that they’re going haven’t been all that well explored. But people have been out. Are they not talking to each other at all?  Space is big. There’s a lot of places, but I feel some of this should be charted by now. They at least might've heard some rumors about this place.

I don’t have anything wrong with fun and silly episodes. Especially after what was a pretty serious affair in Balance of Terror, but this one just did not do it for me. I think it also fell victim to just how late I’d seen it. This is the first time Star Trek has done this kind of episode, but this is a theme they go back to a bunch of times. I also just listened to a podcast about the DS9 episode that’s very similar (Random Trek, if you’re not listening to it, then you’re really missing out). Even though this episode is the first one to do it, I just feel like I’d seen this done so many other times. Almost every time I think it’d been done better anyhow.

I changed my mind. I rewatched this episode and I was wrong. It’s fun. It’s not the greatest ever, but it’s not all bad. I haven’t spent as much time with this crew as I have the others, but Deforest Kelley does silly well. And his silliness really carries the episode. Shatner doesn’t, but that’s not too much of a surprise because he doesn’t do much of anything all that well. McCoy hitting on the Yeoman merely seconds after she was almost raped seemed a bit much in retrospect, but this isn’t the only TOS episode that gets a little Mad Men. It's fun. The fight between Kirk and Finnegan takes forever. It's a pretty shitty fist fight, even by Kirk's unathletic standards, but all the McCoy scenes make it worthwhile.
But I had a lot more fun with it the second time.

If Wishes Were Horses DS9. This is an early DS9 episode that deals with a similar plot device. It’s played a little more seriously. As seriously as any episode that features Rumpelstiltskin in it at least. A subspace anomaly causes manifestations of people’s imaginations. One of them being Rumpelstiltskin. It’s not great. Shore Leave might be better. McCoy really carries that episode, and there's no McCoy in this one to carry it. Just Rumpelstiltskin. There's some shittiness in it, but it has its moments. You do get to see Sisko talk to one of his favorite baseball players which is nice because baseball rules and so does Sisko. 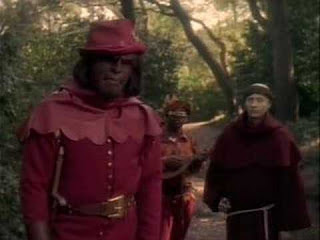 QPid TNG: Generally am not a huge fan of Star Trek characters in settings where they don’t belong. Works sometimes in time travel episodes, which there a bunch. They are literally going back all the time. Temporal prime directive be damned. It’s a wonder they’re able to get any consistency with the timeline at all. Most holodeck episodes suck because who wants to see a bunch of badass starship travelers in the old west? I don’t like the old west. If I was into the old west, I’d be watching some stupid old west show. I’m not, I’m watching a show that’s supposed to be about people trekking through the stars. Anyhow, this is an exception to that rule. Q tries doing Picard a favor and it all goes straight to hell. He makes the crew live out the Robin Hood story, and it’s a fun one. I’ve always had mixed feelings about Q as a character, but John Delance is awesome and he and Patrick Stewart are great together. Vash is a great love interest for Picard, even if she’s underutilized. Plus you get a bonus of one of Worf’s all time great lines. If you looking for a Trek that features Trek crews dealing with storybook characters, then that’s the one I’d go

Well, that's it for this one. I guess if there's a lesson to be learned it's that if you don't like an episode of Trek the first time, maybe give it another go. Maybe you'll realize just how awesome Deforest Kelley is.
Posted by Adam Sokol at 4:54 PM