This was the first time for me seeing this episode. Little ashamed to say on account of where this fits in terms of Trek history. This is the first appearance of famed Star Trek villain John Harrison! AKA HarrisKhan AKA Khan. I’ve seen Wrath of Kahn a number of times. I’ve also seen Into Darkness. But I’d never seen this one. I really should have. I’ve liked the last couple of episodes and I’m not saying this one was bad, but holy moly is this episode rapey.

The gang stumbles on an old ship of cryogenically frozen folks. One of them happens to wake up and it’s a dude named Khan. Turns out he had to leave Earth around the 1990’s because he’s genetically enhanced and was part of World War 3 which were fought between humans and genetically enhanced folks. I assume. They don’t go into the history of the war all that much, and I don’t feel like getting into a Memory-Alpha rabbit hole reading up on it.

Turns out it's not just strength and brainpower but when you get genetically modified you also get a hefty dose of ambition and ego. And HarrisKhan wasn’t just some run of the mill guy in the 90’s but conquered a quarter of the world.
Pretty soon he gets back to his old ways and takes over the ship. But don’t worry Kirk wins in a fight. Which is complete bullshit. Then after the fight, he just drops him off on a planet and washes his hands of him.

Yeah, this one is pretty good. Khan has become such a huge part of Trek lore it was neat to see how it all began. Just some pretty good episode. I can see why they chose him as the villain for a movie. Ricardo Montalbán is an engaging actor. I really believed he was about to rape Marla McGivers all the time. 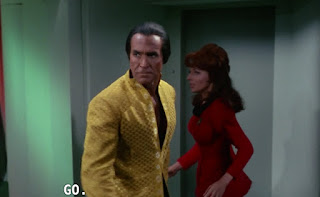 The relationship between Kahn and Mcgivers is pretty fucked. That’s a pretty abusive relationship and they don’t really give it a lot of due. I know that it was the sixties, but still. Yikes. Even for the sixties, this is pretty nuts. The fact that Kirk just leaves her on a planet with him at the end where she will be beaten senseless by this monster is fucked.

The fight at the end was a little ridiculous too. Khan brags about being five times stronger than Kirk. That is pretty goddamn strong. He’s a superhero. Kirk doesn’t look like the strongest guy on earth either. Doesn’t appear all that fast or skillful in terms of fighting. He is just extremely unremarkable in every way shape or form. Yeah, Khan got a little cocky but I still don’t see him losing that fight. I think that really is the only thing about Into Darkness that seems to make sense is that “John Harrison” is able to crush a grown person’s head with not too much effort and able to just laugh off any physical attack by Kirk. That's how the episode should've ended. By Kirk getting his sweaty melon crushed like a grape. Would've led to some drastic changes.

Gene Roddenberry gets a lot of credit for having a very utopian vision of the future, which he does for the most part, but at the same time his utopian vision of the future does involve a third world war in the 90’s and for a good chunk of the world has to live under the thumb of despots and also we start genetically modifying monsters who kill people at will. I guess you can’t make a utopia without breaking a few eggs.


Starfleet Academy is really the only place that teaches the long slow double handed punch. It’s nuts that they don’t teach anyone how to throw a quick jab in there. Nope. Just long slow swings using both fists for maximum blockability. Seems like a not a great fighting strategy, but what the hell to I know.

If you’re looking for something better, but still want to watch Khan, then you can go with Star Trek 2. The one where he’s wrathful. It’s really good. Largely considered the best Star Trek movie. I don’t think so, I’m more partial to 6, but this one is still pretty damn good. If you want worse and still see Khan, then watch Into Darkness. Into Darkness is not a very good movie, but you know what they say about even numbered reboots to movie franchises that usually don’t have very good odd numbered entries, right? I don’t know. It just wasn’t very good. Some neat effects, but really not all that great in my opinion. I don’t know why they made it. Star Trek: The Motion Picture wasn’t great. I heard that after they realized it wasn’t great they mined old episodes for a suitable plot to use in the second movie. They settled on Kahn. I don’t know why they didn’t do that with the second Star Trek reboot movie. Go through all the old episodes and find one that wasn’t already a near universally adored movie. But whatever. Watch Space Seed, then watch Trek 2, then if you have time watch Into Darkness and see how it all went awry.
If you want to hear more about genetically modified folks I'm a fan of DS9's "Doctor Bashir, I Presume." The one where we learned that Dr. Bashir was genetically engineered. It was kind of a 180 for Dr. Bashir's character and some people thought it was a cheap retcon, but fuck it. I like it and prefer post retcon Bashir. If your thing is watching people wake up from cryo-sleep then you can also watch VOY's The 37's. In which Janeway meets Amelia Earhart for some goddamn reason.

That's it for this week.