Good Trek / Bad Trek #22 The Return of The Archons


Well, this has been a busy week. America is now out of the Paris whatever about climate change. That stinks I’m told. I’m sure it does. People smarter than me seem to think this is pretty dangerous business. I’m not a scientist. Most the science I take in is fiction based. But I’ll agree that this is probably bad. Rand Paul seems to think it’s a good thing which is good enough for me to think it’s a bad idea. It’s evidently a good thing for coal miners. I don’t know what is going on with Republicans and coal miners, but good gravy is there some weird ass pandering going on. I’m just saying that a coal miner/fetus ticket would straight up dominate a GOP primary. I don’t understand what people’s fascination with coal miners is. What kind of dirt (soot?) do these people have on the GOP? The whole party won’t shut up about how fucking amazing coal miners are. They’re holding every coastal city hostage because God forbid they attend an adult learning course at a community college and learn a new skillset. They can get a new job and then they can still dig stuff up on their free time. It’s not like coal is the only thing underground. Or they can just dig. I don’t care, but I think they’re being coddled way too much. I mean, what a bunch of soot flakes.
Also, I watched The Return of the Archons. A really bizarre and pretty solid episode.

Sulu returns from an away mission all kinds of messed up. So Kirk goes back to the surface with another team and then The Purge happens. It’s pretty nuts. Soon as 6:00 hits everyone just starts making out and raping and throwing rocks through windows. Pretty nasty stuff.

Then eventually everyone goes back to acting all boring and brainwashed. Something is up and Kirk aims to get to the bottom of this shit. Because Kirk, Spock, McCoy, and some bag of shit who was also in the away team aren’t acting all brainwashed they attract the attention of the brainwashing police who say they answer to a character named Landru. McCoy gets wiped, but someone on the inside decided to help Kirk and Spock liberate everyone. Turns out it was a giant computer who was controlling everyone. Kirk gets in a battle of wits with Landru and it explodes due to his humanity and raw sexual magnetism.

They leave someone behind who’s going to help these folks adjust to not being controlled by the computer. Kirk makes a joke about Spock and that’s about it.

Yeah, this was pretty solid. I thought the whole Purge thing was funny. It implied a lot of raping was going on, but still. I don’t know if the makers of The Purge franchise site this as a direct influence, but it seems like it has to be.

I liked the fact that the computer controls every aspect of these people’s lives and as soon as that control is lifted for a little bit everyone just goes fucking bananas. It’s shot in a jarring, but also a silly way. Most of the purging is filmed as men carrying women over their shoulders and rocks going through windows.

Scotty is in command of the Enterprise while Kirk and Spock are on the surface. Up until this episode, I didn’t think Scotty was even an officer, but I looked it up and I guess he is (was/will be?). I must’ve gotten O’Brien and Scotty confused. That being said, I’m still curious what the chain of command is here. I know there was a beam pulling the ship down that required Scotty’s expertise, but I’d think that more than a few lieutenant commanders would be in line for the big chair before the chief engineer.

I don’t know what it is, but brainwashed McCoy had me cracking up. Especially when he was trying to eavesdrop on Kirk and Spock plotting to take down Landru. He’s just the best.

This was really good. I’d say watch this one. It’s silly and fun and I really liked it. The whole omnipotent computer is a theme that comes back time and time again so there’s a lot to choose from, but honestly, I was having trouble thinking of one I liked as much as this one. If you want to go for a shittier episode there’s more than a few TNG ones. There’s 11001001 which is not great but does have a scene where Riker and Picard seem to debate whether or not to double team a sexy hologram. You can also go with the TNG episode Ship in a Bottle. Geordi accidentally discovers that the computer is capable of creating a new species of super intelligent holo-beings. Unfortunately, that’s not what the episode is about. It’s just a shitty holodeck episode where Data, as Sherlock Holmes goes up against Professor Moriarty. Ship in a bottle is a pretty well-regarded episode, but I’m not a huge fan of any holo-episode. If I wanted to watch folks run around old England I’d watch something else. I’m watching Star Trek, so trek among them stars, folks.

There are two episodes I can think of that I liked as much or better. VOY’s Dreadnaught. B'Elanna Torres programs a torpedo to take out Cardassians, but it gets off course and ends up targeting a planet of innocent folks. She has to shut it down, but since she’s the one who programmed it they know each other’s tricks. Torres was a great character who didn’t get nearly enough episodes to be the center. DS9’s Statistical Probabilities is also solid. Bashir and some other genetically modified folks decide that statistically, it’s highly improbable that Starfleet will win the Dominion War so maybe it’d be best if they just cut and run. It’s not about computers controlling people but it is about a smarty pants who thinks he knows what’s best for everyone. 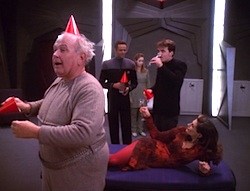