Ready To Feel Old? Here's What The Cast Of 'Cocoon' Looks Like Now!

It’s hard to believe that cultural phenomenon Cocoon came out in 1985. Over thirty years ago! Whether you were old enough (and lucky enough) to see in the theaters or it was the only VHS that was lying around your grandparents house while your parents stashed you there for the weekend so they could “get some goddamn peace and quiet for once in their goddamn lives,” I think we can all remember the massive cultural impact that the movie Cocoon had. As us Cocooniacs get ready to celebrate the Cocoonaversary, let’s take a look at what the cast is up to now!

One of America’s most beloved character actors still working today. Dennehy is the kind of actor, who every time he shows up has you saying “oh shit, it’s that guy.” You can currently see Dennehy in TV’s The Blacklist in addition to a number of other upcoming roles on the big and small screens.

The scene in which Maureen Stapleton’s Mary shows her newfound Cocoon youth and climbs a tree with her grandson is as iconic as the movie itself. Unfortunately, Stapleton is no longer climbing trees as she passed away in 2006!

I don’t think I was alone as cherishing the life Gwen Verdon brought to the role of Bess McCarthy. Unfortunately, there are no magic alien “cocoons” in real life and she is now dead.

I hope you didn’t use up all your heartbreak watching Herta Ware’s dementia suffering Rose Lefkowitz because Ware passed away in real life in August 2005.

One of the most touching relationships in Cocoon was between Jack Gilford’s Bernie Lefkowitz and his wife Rose. Bernie refused to use the healing power of the cocoon, instead of trying to help his ailing wife. It was beautiful and touching and heart-wrenching and Gilford passed away way back in 1990.

Clint Howard, younger brother of Ron Howard has been steadily working his entire life. Chances are you’ve seen him in any number of roles throughout the years. Though finding steady work as an actor now at some point between now and Stardate 1512.2 Howard will take the form of a space baby and travel the cosmos as Balok. He will then spend his days testing and exchanging ideas with folks he meets along the way in his starship. Safe travels, Mr. Howard/Balok!

Her relationship with her husband gave the film some real emotional depth. Unfortunately, both her and her onscreen husband, played by longtime onscreen partner Hume Cronyn have since passed. Which brings us to… 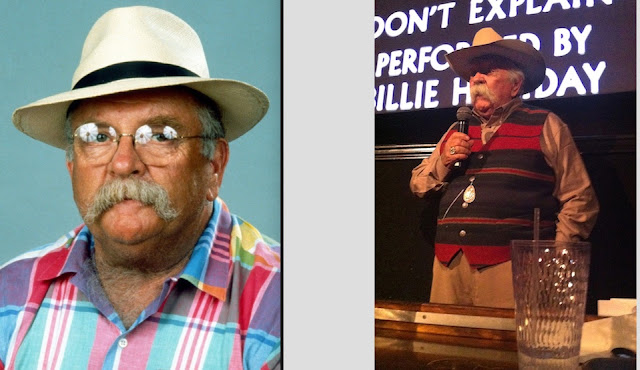 Wilford Brimley was in Cocoon, and he’s still around. I know! I was surprised too. But I guess he was in something called “Timber the Treasure Dog” just last year. I’ll be damned. I triple checked but check back for updated version soon.

Who could forget Steve Guttenberg’s iconic take as ship captain Jack Bonner. Don’t let the casket worry you, Steve “The Gute” Guttenberg is still very much alive, but prefers to sleep in a casket surrounded by dirt on account of a weird “sex thing.”
Posted by Adam Sokol at 11:12 AM