The whole white power rally started because they were being a bunch of whiny babies over the fact that a statue of Robert E. Lee was being torn down. This pissed these idiots off. They think removing statues is the same as erasing history. That is very wrong. I do love that argument though. That removing statues of Confederate folks is somehow erasing history. If for no other reason than it implies that there’s a certain segment of America that gets all their history from statues and probably other landmarks and nothing else. These dumb dumbs imply that the only record of any of this shit happening is a bronze asshole on a horse. I'd like to think we've been writing a lot of this stuff down somewhere. I imagine these people indignantly going "45 presidents? Uhh, I don’t think so pal. I don't know what your fancy "books" say but the America I live in has had 6. You got the 4 on the mountain. You got Lincoln. You got Washington. Who we all know was the super tall and skinny one."

Well anyhow, the world is going to shit, and this episode of Trek is The Changeling and wasn't that much better than our fucked political climate.

This week we have The Changeling. The gang is running around and realize that a full four planets that are supposed to be brimming with life are vacant. That’s bizarre. Looks like danger is afoot. Just as they realize that a giant green beam comes out of nowhere and gives them the business. They’re in trouble until they hail whatever it is that’s shooting at them. Soon as they do they it wants to talk. They beam it on board and it’s a small self-aware probe going by the name Nomad and it thinks Captain Kirk is its creator.

Nomad is pretty heavily armed and it think’s its mission is to go and cleanse any system it encounters that are less than perfect. Bad news for everyone it encounters because it thinks that all biological life forms are imperfect. Good news for the Enterprise it’s pretty keen on Kirk. So it’s cool for now. Nomad kills Scotty. Wipes Uhura’s mind clean. Brings Scotty back to life. And unceremoniously dispatches four red shirts. Spock does a mind meld and we learn that this was an old Earth probe that accidentally fused with another planet’s probe whose mission was cleansing impure dirt samples.

The probe realizes that Kirk is not perfect so Nomad decides it decides to kill everyone on the Enterprise. Kirk then points out to the robot that it itself is imperfect because it confused Kirk for its creator. That blows its feeble mind and that’s it. Threat over.

It was okay. It certainly wasn’t great. I read that it was one of the few episodes that take place entirely on the Enterprise. I guess that was neat. I didn’t think it was awful, it just dragged. I don’t know if all shows were paced this terribly in the 60s or if Trek was just a particularly bad offender, but it’s a slow episode. The redone effects at the beginning look solid. But Nomad looks pretty silly. Doesn’t help that any TV made in the past fifteen years has a resolution that enables you to see the string letting Nomad float through the corridors. One thing I thought was neat were the Nomad POV shots. You get to float along with Nomad as the crew gives it the stink eye.

Also, it seemed a bit farfetched that Kirk was the one to get in a battle of wits with a super intelligent robot. This episode was made for Spock. The fact that he’s sidelined the whole time didn’t seem right. He should’ve been the hero.

Which as a DS9 fan was a bit of a letdown, because I was hoping by the title that maybe we'd get to see an early forebear of Odo. No such luck. Just some dumb robot who Kirk calls a changeling at one point. 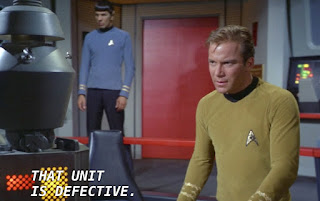 The whole thing with Uhura is fucked up. Nomad wipes her mind clean. Erases all her memories, and everyone doesn’t seem to think like this is going to be a big deal. You can’t just be told about your own life and then be the same person. I think there’s a shitty Harrison Ford movie about that very thing. She is done as a person. She is done. The Uhura they all knew and loved has been lost forever and nobody gives a shit. But Nurse Chapel is there teaching her to read at a first-grade level and it’s treated like that’s just adorable.

But enough about me. I started writing this because I thought it would be fun to do a Trek blog that folks who aren’t that familiar with Trek might enjoy. I have no idea if I’m succeeding in that regard, but this week I decided to make my wife, Erica watch both this episode and two of the better Treks with me.

She says no. Much more emphatic no than I thought. I wasn’t blown away by this one, but she thought it was boring. In her defense, it was a boring episode. I’ve been watching these for a while now so I’m getting used to the pacing of these old episodes, where she has not. Watching a show that plods along this slowly can be jarring.

Erica also found it fucked up that Kirk lied to Nomad and gained its trust as its creator. I guess she found this pretty immoral. She is obviously wrong about that because Kirk didn’t really have a choice. He was trying to save his ship.

Something Erica noticed that I missed was that when Uhura gets her mind wiped she has to relearn English, but just instinctively knows Swahili. We both agree that that’s more than a little fucked.

She also did not like the fact that it was called The Changeling. Not because she was bummed that one of Odo’s ancestors didn’t show up, but because she just thought it was a dumb fucking name.

You want probes, Trek’s got probes. The best probe episode of all time is TNG’s The Inner Light. One of the best episodes of all time. I can’t recommend it enough. In it Picard gets scanned by a probe which causes him to think that he’s another person living on a planet he’s never been to. Has the probe broken his brain or is something else going on? Never will hearing shitty flute music be so heartbreakingly sweet.

We didn't watch this one though. We watched two Voyager episodes that deal with probes. Erica isn’t too familiar with all the Treks, but she does like Voyager the best. Really she just likes Rober Picardo’s Doctor. She suggested I change this blog to one where I just review episodes on how great The Doctor is in each episode. I would rate an episode where The Doctor is amazing in it as five hyposprays. An episode where The Doctor does not appear would get the dreaded zero hypospray rating. For example, the episode of TOS would get zero. On account of I don’t think Robert Picardo was doing much acting at that point. So anyhow I chose two Voyager episodes.

We watched Friendship One first. Which I chose because it’s about an old Earth probe that causes havoc around the galaxy. The gist is that Earth launches a probe teaching other aliens about how to conquer the stars. A planet’s species attempts this and accidentally causes nuclear winter. Janeway has to try to help them. Erica oddly enough was not impressed with this one. She only gave it two hyposprays. Which is weird because The Doctor is in it and saves the day at the end. She also said that it contained “way too much Tuvok.” Which almost caused a fight because Tuvok is a great character and Tim Russ is just great. Then I learned that she got Neelix confused with Tuvok. Which almost caused another fight, because that’s fucking ridiculous. So I say that this is much better Trek, but she wasn’t all that impressed.

Even though it was getting late and she wanted to go to bed we watched the season 2 episode Dreadnought right after. This is one of my favorite Voyagers. I think I may have even made this one a Good Trek before. Torres has to track down and disarm an automated missile that she programmed years before. In terms of plot, there are a lot of similarities between this one and The Changeling. I have a lot easier time believing that B'Elanna Torres is going to outsmart a super smart machine as opposed to Kirk. Kirk would try to punch it then watch as his whole ship is destroyed. I keep on going back and forth over whether I like Kirk. This week I do not. Anyhow, Erica also liked this one a lot better even though it also doesn’t have a lot of Doctor in it. She gave it three hyposprays. The Doctor is in this one even less, but the episode gets an extra hypospray because the screen time he does have he knocks it out of the goddamn park.

I suggested we also watch The Inner Light but seeing as she knows TNG does not feature The Doctor so will have a very low hypospray rating we did not. Watch any of those three episodes as opposed to The Changeling. Maybe not Friendship One though, because it very much underwhelmed my wife despite its relatively high hypospray rating.

That’s it for this week. Looks like next week is a Dark Mirror episode. Finally, Shatner will have an excuse to overact!