Been a weird week for me. My day job laid off a bunch of people. The Detroit Tigers are a fucking mess. Justin Verlander has been a huge piece of The Tigers since I bot back into baseball. Watching him in an Astros uniform is going to be really weird for the next few years. I am not looking forward to this rebuild, and from the looks of it, it’s going to be a brutal one. Also, I don’t want to get laid off. I like my job. I don’t know. Everything is a mess and we’re all gonna die someday. So let’s just say I have a lot invested in Star Trek right now If Discovery isn’t amazing then I’m gonna lose my shit. Hopefully, it’s better than this utterly ridiculous episode, which was The Apple. Hmmm. Wonder what this will be a metaphor for?

Kirk, Spock, McCoy, Yeoman Martha Landon, Chekhov, and a bunch of red shirts are investigating a seemingly perfect planet. Surprise! It’s not perfect as one of the red shirts immediately gets shot and killed by a plant. Nobody seems too thrown by this. Then Spock gets shot by another plant and everyone freaks out. He’s fine though.

They find the inhabitants and they’re all pretty primitive and they live to serve a giant cave robot named Vaal. Also, they don’t ever age. Which is weird. And also, there’s a tractor beam that’s sucking the ship in. Which is no good. Because it could mean the death of everyone aboard. Kirk is pretty sure that Vaal is responsible for the tractor beam and why they can’t beam up.

The landing party seems less disturbed by the fact that half of them has been murdered by the planet and more by the fact that since Vaal has been providing everything for them the inhabitants of the planet don’t age, but they also aren’t growing as a people. They haven’t technologically advanced in thousands of years. They also don’t have sex which seems to drive McCoy nuts.

They phaser Vaal into submission and condemn the people to have to fend for themselves. Bad news: They’re gonna age and die. Good news: Now they get to learn how to fuuuuuuck!

No, sir. Not only was this bad Trek. This was so bad that it was almost good. It was bad enough where it was fun to watch. It was so bad that I can’t wait to watch it again. It checks all the bad Treks. It’s got some fantastic 60’s era sexism, the heaviest of a heavy handed message, red shirt after red shirt getting offed in ridiculous fashion.

We get fifteen minutes in before three red shirts are dispatched. The fourth and final lasts almost the whole episode before he gets his skull bashed in. I heard that this episode is the birth of the all red shirts are doomed to die trope. I can see why. When the first three die I kept on yelling at the last. Dude, just wait in one of the huts until this all blows over. You’re just an ensign. This isn’t worth it.

They didn't even try to save the first red shirt who gets shot by the plant. He goes down and that’s it. Everyone is just like “well, that sick of shit is gone. Let’s keep on exploring this planet.” Then as soon as Spock goes down McCoy goes into overdrive to save him. Dude, you’re a doctor. Your oath is not sitting idly by while harm happens.

Here’s your weekly evidence that the 60s were a much different time than today. Chekhov just wants to fuck the yeoman. Danger be damned we’re in a weird forest and watched two of our comrades die. Let’s get our sex on. 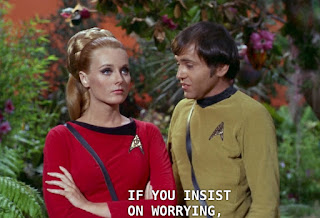 A Trek nerd problem. At one point Kirk asks Spock knows how much Starfleet has invested in him to which he immediately responds with a  figure in the hundreds of thousands. Of what? I don’t know. This is supposed to be a post scarcity society. I’ve watched a lot of Trek in my day. So Starfleet started out buying and selling folks. Gold pressed latinum maybe. But bricks, bars, strips? What? I don’t think there was money in Enterprise. So in the Enterprise timeline, there’s no money. Then they start using money again for a little while. Then they become post scarcity again.

Another Trek nerd thing. Yo, the Prime Directive. That’s the main rule of Starfleet. It says that they shouldn’t interfere with less technologically advanced societies. Why are they even on this planet? This is a pre-warp civilization and they’re just running around fucking shit up all around them. They should never have been there in the first place. I know it’s not, but next episode should be Kirk’s court martial.

The bit of levity where they’re all eating and the yeoman is trying to figure out they'll be taught sex is pretty funny. Seems a little fucked to have that light moment when people are dying left and right, but it was intentional humor that actually worked.

Spock has been poisoned and also struck by lighting. When he got struck by literal lightning he got second-degree burns. Meanwhile, red shirts are being dispatched left and right. they're just being offed like nobody’s business. Really pays to have your name in the credits, I guess.
So they just don't try to figure out what Vaal is or how it got there? Seems like a big mystery to me. A mystery that might make for a good episode of Trek. No? We're just gonna move on? Alright. Cool. I guess that's it then.

This is a great bad one to watch. I don’t want to recommend anything worse because anything I could recommend would be bad, but in a way that’s not nearly as fun as this. I guess you could watch The Happening. That movie also has people being killed by plants. Mark Wahlberg is as close to a modern day Shatner that I can think of. If you want to watch an even worse garden of Eden allegory that’s fun and silly but god awful, I’d say go with the movie The Apple. Both are entertaining in the worst ways.

Star Trek Insurrection. Say what you will about this movie. It’s not known as one of the good ones and I have no idea why. It’s great. People criticize it as just being a long episode with better effects. Yeah. That sounds awesome. It’s about a primitive group of people on a planet that doesn’t age. Also, features some pretty crazy Prime Directive violations. I like it.

That’s it for this week. Next week is one of the better episodes. The Doomsday Machine. I’ve seen that one already and it’s solid. Other than that I say thanks for the memories JV. You’ve been fun as hell to watch over the years. I hope you get a ring this year. 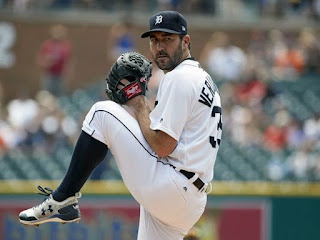