I Got New Old Pants & GTBT #36 The Doomsday Machine

Intro: I’ve loved Star Trek since I was a kid. I started by watching TNG in 6th grade. I’ve been a fan since then and though I’ve spent a lot of time watching Star Trek, I’ve never watched The Original Series. So, I’m watching and reviewing them as a fan of Star Trek, but one who’s never seen any of them. So I’m watching all the TOS episodes for the first time and saying whether or not they suck. At the end, I give examples of better Star Trek to watch that remind me of this episode. That’s it.


I’d like to think that this isn't just a Trek blog, but a lifestyle blog. The lifestyle of a guy who likes to watch Trek. And one-half of lifestyle is style. To that end, I got pants that I’m pretty excited about. Not just any ordinary pants. Pants I gave away years ago. Didn’t like them and they didn’t fit. So I gave them to my buddy Max. Max had them for a few years turns out he didn’t like them either. So he gave them back to me, but something had changed. I don’t know if I’m not the person I used to be or these pants have changed or both. Whatever has happened me and the pants have never been happier. So just like the saying goes, if you love something let your buddy Max have it for a while. If it’s meant to be it’ll come back after he realizes that he doesn’t really like it either. But maybe this time you'll like it. Who knows.

Know what else was a perfect fit, this week’s episode of Trek. Which is The Doomsday Machine and it’s great.

We got some dramatic music. Danger is afoot. The gang is running around what should be very dense star systems. There should be all sorts of planets, but there is just rubble. What could cause this kind of destruction? Probably the titular Doomsday Machine. I mean, the episode probably wouldn't be called The Doomsday Machine if a machine that brings doom wasn’t the focus of it.

They’re out there because they’re looking for a Federation ship, the Constellation. Which they do in short order. It’s adrift, not answering hails, and looks like shit. They go over to investigate. They find the captain. Matt Decker. He’s not looking great. He beamed his whole crew down to the third planet. Then the third planet got doomsday machined. Doomsday machined most foul.

The Enterprise encounters the doomsday machine which is a miles long tube that destroys ships and planets and takes the debris in as fuel. Decker outranks Spock and decides to take command of the Enterprise while Kirk and Scotty are tinkering with the Constellation. Decker wants to attack the machine. Spock wants to get Kirk back.

Hell yeah. This is one of the best episodes I’ve seen so far. Ranks right up there with Balance of Terror which is still by far my favorite TOS episode. 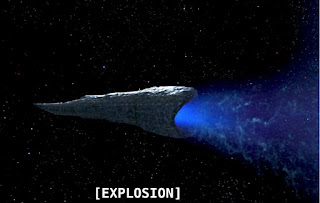 When Star Trek Into Darkness came out my friend Danny and I were talking about what a swing and a miss it was. There was so much to hate about it. Not the least of which would be the lack of a colon in the title. The first Trek reboot was so fun and well done it came as a shock how bad it was. Why remake Wrath of Khan? Why? That’s a pretty universally adored Trek film. Seems like not the way to go. When we were talking about it Danny said suggested that if they wanted to just redo something take an old episode that could be expanded upon and redone with better effects. This episode specifically. There’s so much going on here that would've made a great movie. You have everything. It’s a solid episode and it would’ve made an amazing movie. Fuck you, JJ Abrams and fuck your Wrath of Harrison. You could’ve done some great stuff.

Watching this episode, which is very good I kept on thinking how much better a movie this would have made as opposed to Into Darkness. They could have brought back Captain Pike in the Decker role. They could have made the actual doomsday machine look less ridiculous. Even though it doesn’t look awful with the updated effects. They could have had some shore leave on one of these destroyed planets to give it some emotional resonance. Could’ve been amazing. Still a good episode. But would’ve made an absolute bananas movie. It’s a shame.

Captain Decker is out to give Kirk a run for his money in the shitty overacting department. Yeah, 400 of his crew are dead, but Jesus Christ get a hold of yourself.

The doomsday machine is a giant planet destroying tube. Okay. I’ll go along with that, but something that takes in fuel and gets more and more powerful is a perpetual motion machine, right? That’s impossible I think, but I really have no idea.  Really the science behind the doomsday machine's fuel and Matt Becker's shitty acting are the only issues with this episode. It's awesome. I guess maybe doomsday "device" would've sounded better than "machine," but I'll let that slide.

Star Trek Into Darkness. I don’t know. Some people love that movie, but I thought it was pretty lame. The effects are neat. The cast is all solid. The shot of the Enterprise rising out of the clouds is something I could watch all day every day. It just pissed me off. Maybe you’ll like it. I don’t know. One thing's for certain is that it’s not nearly as good as this top notch episode.

TNG: Arsenal of Freedom. A season one TNG that’s not awful in terms of the episodes that surround it, but still sucks. The TNG crew beam down to a planet that’s been taken over by weapon drones. Turns out they were all part of a weapons sales pitch that got a little out of hand, and now everyone is dead. Rampant consumerism and weaponized drones…Sound familiar, AMERICA! It’s not great. Watch this one instead.

That's it for this one. I don't know which one is next week, but I'm sure it'll suck compared to this one.
Posted by Adam Sokol at 9:23 AM