The DCEU Racist Alliance & Good Trek/Bad Trek #57 Discovery: The War Without, The War Within

Intro: I’ve loved Star Trek since I was a kid. I started by watching TNG in 6th grade. I’ve been a fan since then and though I’ve spent a lot of time watching Star Trek, I’ve never watched The Original Series. So, I’m watching and reviewing them as a fan of Star Trek, but one who’s never seen any of them. So I’m watching all the TOS episodes for the first time and saying whether or not they suck. At the end, I give examples of better and/or worse Star Trek episodes to watch that remind me of this episode. Usually, I ramble on about some bullshit before the Trek. That’s it.


I was talking about people who were angry that Wonder Woman didn’t get an Academy Award nomination last week. This week people were freaking out over a different superhero movie. This time Black Panther. And it doesn’t matter where you lie on the political spectrum, there’s a reason for you to be angry about Black Panther. I’ll admit I’ve got a little bit of superhero fatigue. It’s not that I think that they’re bad movies. They’re for the most part competently made (Dawn of Justice notwithstanding). The new one coming out, Black Panther looks fine. I’ve heard it’s a lot better than fine. I’ve heard it borders on super badass. I never had any attachment to Black Panther growing up, but those are the movies that I’ve enjoyed most among the most recent batch of superhero movies. I read a lot of Spiderman growing up. I liked the movies fine but didn’t go nuts for any of them really. I had never even heard of the Guardians of the Galaxy until the first movie came out and that one was probably my favorite of them all.

A lot of people do have an attachment to the hero though because people are really excited for the movie. So much so that when the movie got its first negative review on Rotten Tomatoes people freaked the fuck out. That’s messed up. It wasn’t even that negative a review. It was a 3/5. Which is a positive review. He just didn’t like it as much as most other people who have seen it and now a bunch of people who haven’t seen it yet. It’s all very weird and anyone who is legitimately angry that a reviewer gave a positive, but not positive enough review to a movie that you haven’t even seen yet is a silly person who has too many opinions and hasn’t had enough bad things happen to them in life.

Some folks are less than thrilled about this movie and what it represents. Fans of the DCEU for starters are decidedly not pumped about this. DC fans are trashing Black Panther before they’ve seen it. Which is almost as weird as heaping praise on it before seeing it, but at least that way there’s some optimism that goes along with it. This is just plain internet misanthropy. Which I guess does fit in pretty well with the DCEU aesthetic. DCEU fans are spending their time downvoting the audience score on Rotten Tomatoes which seems pretty nuts but I guess when it’s either that or watch Dawn of Justice again I’d also rather click that I didn’t like something while listening to podcasts.

Racists are also spending their time downvoting Black Panther. Racists obviously weren’t going to be too pumped about a movie called Black Panther. I can't imagine that they were the target demographic. I think I mean, Jesus Christ. Why? You spend all this time on the internet downvoting a movie when you could just be watching many many movies full of white people. What do you care? Why does everything have to be for everybody? Even a racist has to know that non-racists have buying power and like to see movies sometimes.

I think that racists and DCUE have teamed up with a bunch of racist douche bags both says a lot about the DCEU enthusiasts and reinforces my longhand belief about the internet and that’s that the internet needs to calm the fuck down. Almost every viral thing almost every piece of outrage leads me to think that the internet needs to just take a deep breath and just relax. Does nobody do that anymore? Is that just a thing that doesn’t happen anymore. Can you just not take anything in stride anymore? You're a DCEU fan and you'd rather team up with self-admitted racists than just let other people enjoy their movie? That's messed up.

Know what isn't messed up? This episode of Discovery, which was pretty solid. Here goes.

I’ve said this before, but I’m gonna try to keep the recap portions as short as possible. Chances are if you're reading a Trek blog then you’re at least passingly familiar with the episode. We are in the prime universe. Admiral Cornwell finds Discovery and she is angry. Lorca did have sex with her then leave her for dead. So she has her reasons. She has Sarek do some mind melds and then they’re off to Starbase 1. But it’s been taken over by Klingons, who again are winning this war.

They get the hell out of Dodge and come up with a plan. Spore jump themselves into the Klingon homeward so they can see what’s what. First, they need to grow some new spores. Which they do. Pretty quickly. That’ll help them see what’s good for bombing when they take the fight to them. And Georgiou is going to be the captain of this mission for some terrible terrible plot contrivance reason.

We also get some good meetings between Tyler and Stamets and Tyler and Burnham.

I’m gonna say yes. There are a lot of reasons to shit on DISC. I’ve found more than a few of them. But this show has some compelling characters. The episodes such as this one where they spend the majority of it just interacting with each other tend to be my favorites. We get to learn more about the war and it set up the finale, which looks like it will be a doozy. A lot of action. A lot of folks yelling at each other about what it means to be in the Federation. A lot of debates about Starfleet values. I’m looking forward to it. Sounds right up my alley. Can't wait until Monday morning when I plan on watching it.

Admiral Badass Corwell is here and she is angry. Turns out she not happy having Lorca fuck her and then leave her to the wolves. I like this character. I don’t think we’ve seen the last of Lorca and I’m hoping they let her keep the captain’s seat warm until prime Lorca is back. I know that she’s an admiral and that being a lowly captain would be a bit of a demotion. But I don’t care. I like her. I think she’s a good character and I want to see more of her as a more permanent character.

I have a feeling that these events are going to be wiped out at some point due to some time travel bullshit. That’s going to piss me off, but I guess I’ll wait until it actually happens until I get all pissy about it.

So Tyler is awake and acting more Tyler than Voq which leads to some of the episodes best drama. I know Tilly is nice. But Christ. Niceness has its limits. Give Tyler a couple days. Make sure that he’s not going to go berserker again before joining him for a nice lunch. He did kill a dude in cold blood by snapping his goddamn neck. I know the doctor wasn’t as major a character as Tyler is/was but it seems that a lot of folks are just letting those bygones be bygones really quickly. He snapped the doctor’s neck like two days ago? That’s not a lot of time to have everyone have forgiven him. We do get a good showdown between Stamets and Tyler. It’s short but intense. I guess he was feeling cocky from how quickly that Tilly and Detmer forgave him because I think it’s pretty ballsy that he pushes Burnham to forgive him a little too quickly. He did try to kill her. That is gonna take some time. I’m probably not the best person for love advice, but give her some goddamn time, buddy. At least a full week. 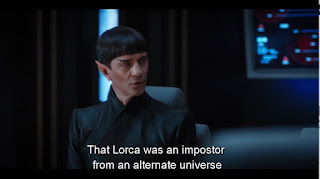 Oh boy, does their run on the Klingon homeworld seem like a hairy plan. They’re gonna use the spore drive to jump into another planet? Yes, Stamets is very good at using this thing but seems to me like last time he used it they ended up nine months after where they wanted to be. Nine months. That’s a hell of an overshoot. You get to the inside of a planet and if you’re off a little bit on either time or space you’re going to end up embedded in the stupid rock. So be careful out there.

I understand that they’re letting Georgiou help with this plan, but to let her pretend to captain the ship seems like a bad idea. I’m sure Admiral Badass is going to try to keep her on a short leash but at the same time, these folks just had a mirror imposter fuck so much shit up. You’d think that maybe they wouldn’t want to just hand the reins of Discovery to another one. This should definitely be considered a “fool me twice” situation. They're trying a reverse Lorca. Which is a bold move. I'm pretty sure it's going to bite them in the ass worse than Emperor Georgiou on Kelpien night.

I was going to say that if you want an episode about a ship that’s in a planet or large hunk of rock but shouldn’t then check out TNG’s Pegasus. But we don’t actually find ourselves in the actual planet yet so not that one. I’ll take a different approach. This episode at its heart is about recovering from the last series of events. Tyler is trying to recover after doing some stuff that he’s deeply ashamed of that was carried out against his will.

So I’d go with the TNG episode Family. One of my favorite episodes that takes place in the wake of one of the Borg skirmishes. Picard after being forced, as Locutus, to kill a whole bunch of his colleagues and civilians goes back to Earth where he hangs out with his cantankerous brother. TNG didn’t deal a lot with the fallout of previous episodes. This is one of the few that actually did. You get to see the emotional toll that his time with the Borg had on him. We also get a visit from Worf’s family which is always a welcome dynamic.

In that same vein, I’d also check out DS9’s The Emissary. The first two DS9 episodes. While Picard was assimilated by the Borg he helped kill a whole mess of folk. One of those folks was Ben Sisko’s wife. Ben, at that point, is still a bit cranky about this. Sisko and Picard don’t spend a lot of time on screen together, but the time they do is well worth the watch. Plus it's the first episode of DS9, which might be the greatest show of all time.

That’s it for this week. Next week is the finale. Should be something.
Posted by Adam Sokol at 11:58 AM