Intro: I’ve loved Star Trek since I was a kid. I started by watching TNG in 6th grade. I’ve been a fan since then and though I’ve spent a lot of time watching Star Trek, I’ve never watched The Original Series. So, I’m watching and reviewing them as a fan of Star Trek, but one who’s never seen any of them. So I’m watching all the TOS episodes for the first time and saying whether or not they suck. At the end, I give examples of better and/or worse Star Trek episodes to watch that remind me of this episode. Usually, I ramble on about some bullshit before the Trek. That’s it.

You hear a phrase a lot usually associated with technology and how far we've come and that's that we're all standing on the shoulders of giants. And it's true. Everything that's been invented and every technological breakthrough is the result of all the inventions before that. Except I guess for the first invention. They did that all on their own and are probably the closest thing to an Ayn Rand character that's ever lived. Everything else that's around today is a combination of hundreds of thousands of years of advancement.
Smartphones are pretty neat. But in order for the smartphone to exist, we needed the calculator phone had to be around to be built upon. The calculator phone was great, for the first time ever you use the same device to call your friends that you used to say "boobless," but the calculator phone would never exist if the abacus phone hadn't already been around. And the abacus phone would never have existed if nobody invented the wheel. That's how that worked.

I don't know. That all reads like pseudo-intellectual bullshit, but it's all I got this morning. I'm tired and this is as good as it's going to get. Know what else is a giant on which we're now standing? Star Trek. Of which I watched an episode. It was called By Any Other Name and it wasn't bad.

We are on a strange planet investigating a distress call. Soon as they get down there and are approached by two aliens who identify as Kelvans and tell them that they're being abducted and their ship is being stolen so they can take their ship to another galaxy. Abducted and having their ship used for a multigenerational trip back to their home galaxy most foul. The gang wants to fight back but these particular aliens have paralyzers that whenever they're used they nobody can move. Also, they can turn anyone into these small soft rock-like things that are easily crushed. As poor Yeoman Thompson learns the hard way when Kirk knocks out one of the aliens

Realizing they have no way to oppose these aliens, Kirk gives in. The aliens take over the ship and use it to travel to another galaxy, which is surprisingly close. Kirk thinks about blowing up the ship but can't pull the trigger. The aliens start getting into their human bodies and start displaying real human emotion. Jealousy, horniness, and love for booze. The three main human emotions. Kirk gets their leader jealous by kissing one of the ladies and after a brief fistfight, the Kelvans realize that maybe they should give up their control over the ship and just go back to the planet at the beginning of the episode and set up shop there.

Qualified yes. I thought it was a slightly above average episode. Not great but it was still closer to good Trek than to bad. The ending is really abrupt. I see what they're doing but it seemed to come out of nowhere. Kirk seduces a lady and then fights the Kelvan leader and everything is cool. There's also a huge tone jump which happens pretty often in TOS episodes but this one was very jumpy. The first quarter to half is kind of intense. Yeoman Thompson gets crushed to powder by the Kelvan leader, Rojan before our very eyes. That's a messed up way to start an episode that has an extended scene where Scotty gets hammered while playing a drinking game with an intergalactic being. But all in all, I liked it.

I think I've made this point before, but these aliens are using human bodies as a disguise. Their real form is a hundred tentacled creatures that I assume would look very different than us. How is it that she's attracted to Kirk? That doesn't make any sense. Even though she's now in a human body with human needs you'd think that she'd still be turned on by hundred tentacled dudes. Not doughy old Captain Kirk. I'm just saying that if I wake up tomorrow in the body of a hundred tentacled being I'm using one of those hundred tentacles to jackoff to normal human women. Just saying.

From Star Trek, you'd think that the only universal among literally every alien species we've met so far is that everyone loves a sick pair of tits. I'm not saying I disagree, but these aliens are from another galaxy. They're not even from the Milky Way and she knew that it would be best if she wore something that really put her bosom out there for the galaxy to see. And god bless her for it. 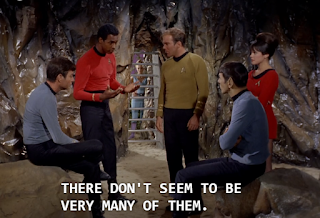 The most surprising thing about this episode is that this dude makes it. The pretty lady gets crushed to dust, but this redshirt who actually attacked these aliens lives to fight another day. I'll be damned. I was practically shouting at the screen when he suggested he could beat these aliens up "dude, you're a black redshirt. How quickly do you want to die?" You believe in duty that's cool, but you have to have been around enough to know that from time to time the redshirts don't come out of the away missions unscathed. So maybe just fade into the background and hope for the best. But goddamnit, he made it. God bless you, Lt. Shea!

I literally laughed out loud when Bones remarks that nobody has seen Scotty in hours. So he's just been sitting there getting shit faced which was his plan to get the paralyzer off these aliens. I'm not saying he's wrong because it worked. But it does seem like everyone should've been on the same page here. Everyone is doing something different and it all works. The seduction the boozing the irritation shots Bones give. It all works. But I got the impression that Scotty would've been drinking in his quarters anyhow and just decided to make that his plan.

Honestly, I'm drawing a blank. I'm not saying that this is the best episode ever and there's no way that anyone would ever be able to top it. I'm just saying I can't think of any particular one that has the same themes. If you want to see an episode where aliens hijack the Enterprise using unconventional means of going to their homeworld then go with the TNG episode 11001001. I definitely would not say that this one is better than By Any Other Name, but what it lacks in being good it makes up for in being batshit bananas. Small blue guys named Binars hijack the Enterprise while it's in the shop getting defragged. They need the Enterprise to save their planet and they plan to leave just Riker aboard to help in case they need a person to help. So they program a hologram to seduce Riker. Yup. But Picard walks in and then the hologram proceeds to try to seduce the both of them. It's messed up. Luckily they figure it out before a hologangbang ensues. But boy oh boy does shit get weird. It's not a good episode but it's worth a watch.

If you want to see an episode where a nonhumanoid species somehow adopts a human appearance and then immediately become sexually attracted to a normal looking human then go with the VOY episode In The Flesh. That'd be weird criteria for choosing an episode but there you go. In this one, the VOY crew stumble on a perfect recreation of Starfleet academy including people they actually know. It can't be real because they're still thousands of lightyears from home. It's all an elaborate training facility used by Species 8472 who are still pissed at Voyager for teaming up with the Borg to murder them. Understandably so. This is a solid episode. I'd check it out.